Inside Baseball: Notes from Jim Bouton’s Iconic Ball Four are Going to Auction 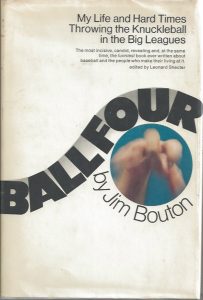 The first edition of Ball Four, from 1970

The opening lines of the 1970 New York Times review of Jim Bouton’s Ball Four are some of the finest that the format has to offer:

Irreverent Jim Bouton! Betrayer of secrets! Clubhouse lawyer! Doesn’t care whom he converts into enemies. Sly practical joker. Weirdo who throws baseball’s most weirdo pitch — the knuckleball. A knuckleball pitcher, even if he has the personality of Soupy Sales, is apt to be unpopular.

Rex Lardner, who wrote those lines, goes on to gush that “Bouton has written the funniest, frankest book yet about the species ballplayer satyriaticus and his numerous bosses, most of whom come out pretty stuffy.” But Bouton turned out to be quite popular, and his iconography as an author seems to have eclipsed his legacy as a big league pitcher, despite career highlights like winning two games for the Yankees in the 1964 World Series.

Bouton’s beloved diary of the 1969 season—and of the life of a major leaguer more generally—includes such on-the-field heresies as the theory that coaches are only good for destroying morale and would make excellent prison guards. Its off-the-field gossip involves the appetite for drugs and women shared by many of the era’s greatest ballplayers. The review gleefully concludes: “I hope he makes a million bucks.” Indeed, the book has sold millions of copies around the world.

Now, according to a New York Times piece by Tyler Kepner,  Jim Bouton and his wife, Paula Kurman, are auctioning the trove of material that went into the beloved book’s publication. Bouton, who has been called a magnificent observer of human behavior, kept detailed notes throughout his time as a ballplayer, scribbled on everything from note cards to to popcorn boxes to airplane sick bags. The sale will feature that stash (which promises to include many unpublished gems of inside baseball), as well as Bouton’s correspondence with the Major League Baseball higher-ups who asked the pitcher to deny what he’d written — less for the material about the carousing than for his insights into some of the league’s more problematic business practices from that era.

Bouton, who is now 77, has always had fond memories of this material, even when he believed it had caused him some trouble. As Kepner writes:

For decades, he was not invited to Old-Timers’ Day at Yankee Stadium, supposedly for having written about Mickey Mantle’s drinking habits. In 1994, after Bouton sent a sympathy note following the death of Mantle’s son, he got a surprise voice mail from Mantle, telling him he was never hurt by the book and had never asked the Yankees to exclude him. That tape is included in the auction.

These rare collectors items are expected to fetch up to $500,000 through SCP Auctions. The sale closes January 21st.