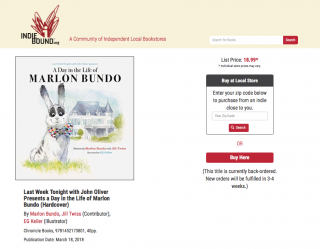 A few days ago, we reported on A Day in the Life of Marlon Bundo, the latest offering from the fourth-wall smashers of HBO’s Last Week Tonight, John Oliver’s much-loved fake news show. The book, out this week, seemed at first a study in contradictions: simultaneously a work of holy vengeance and a sweet way of talking about romantic love with kids; both an obvious publicity stunt and an act of true public-mindedness; and, as far as money is concerned, both a fundraiser for a good cause (all proceeds are going to the Trevor Project and AIDS United) and, at least at the outset, a contribution to the utmost in corporate evil (because, as we reported, indies were not initially given the chance to sell the book, for which Oliver sent fans directly to Amazon).

As we wrote, it was Green Apple Books, indie heroes of San Francisco, who seem to have sounded the first and loudest alarm over the snub: 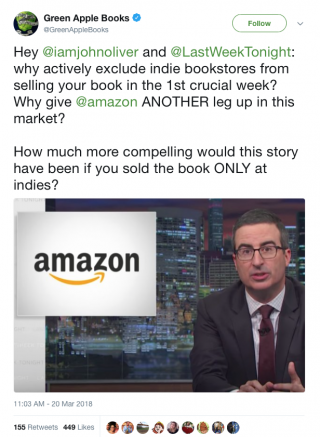 Others were quick to boost the signal, throwing in a few suggestions of their own: 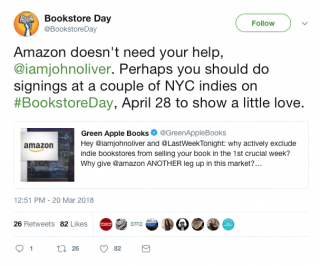 By Tuesday afternoon, it looked as though the efforts had borne fruit: 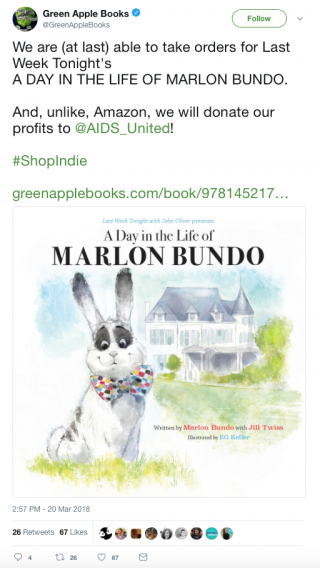 Wednesday morning, the show spoke at last in the voice of the people: 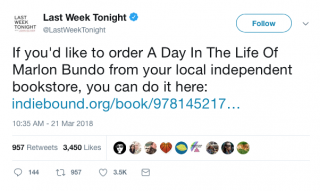 Lest it go unsaid, indie booksellers are under-acknowledged, and their work is crucial. The entire ecology of what we read—all of print culture—circulates on the strength of what they do. Theirs is a job no one takes to get rich — it’s almost invariably a labor of love, and that’s special. And their margins are, ahem, paper-thin.

Amazon, by contrast, is an international powerhouse run by the richest person on earth, powered on the ferocious exploitation of its workers, and hard at work on a massive robot army. One can—and should—dive deeper into any aspect of the preceding, but the basic point is a simple one: the side of the booksellers is the side of justice. It should not have taken two days, but at least the folks of Last Week Tonight finally came around.

Meanwhile, let’s talk for a second about Charlotte Pence, daughter of Vice President Mike Pence—a ghoul who hates gay folks—and author of the original Bundo book. To her credit, Pence took the whole thing in good spirits. “I think imitation is the sincerest form of flattery, in a way,” she said, utterly not getting it, but then added, “But in all seriousness, his book is contributing to charities that I think we can all get behind. We have two books that are giving to charities that are both about bunnies, so I’m all for it, really.” This is hardly amazing, but it is, at least, the right thing to say.