Indie booksellers team up to keep a “rival” store open 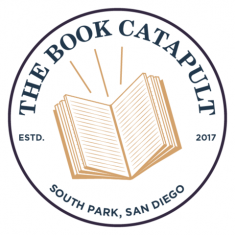 After experiencing chest pains at Winter Institute, Seth Marko—co-owner of San Diego’s Book Catapult—was sent to the hospital for emergency surgery. Claire Kirch reports for Publishers Weekly that the bookstore’s only other full-time employee was also out of commission with a case of bird flu.

With Marko’s co-owner (and wife) Jennifer Powell at his side, there was little choice but to close the store. But in an unlikely and uplifting twist, Kirch reports that booksellers from other stores in the area have been volunteering for more than a week to keep the store open. According to Peter Rowe of The San Diego Union-Tribune, volunteers have even taken on babysitting Marko and Powell’s three-year-old daughter.

“I’ve had to turn away volunteers, from former booksellers to people who know nothing about books but want to help out,” Library Shop manager Scott Ehrig-Burgess told Kirch. Ehrig-Burgess organized the volunteers and took on the daunting task of teaching himself the store’s computer system.

John Evans and Alison Reid, a pair of booksellers from Los Angeles’s Diesel: A Bookstore, even volunteered to drive down for the weekend to help, telling Kirch:

[Marko and Powell] are great people, fellow booksellers, [who] created a wonderful bookstore in their neighborhood and this health crisis just came out of nowhere. They are much-loved in the book community in Southern California, with Seth having various roles over the years in keeping the book culture vital, fun, and interesting.

“Why assist a business rival?” asked Rowe. “Technically we are competitors,” said Julie Slavinsky, director of events at Warwick’s. “But it’s such a close community. We’re all people and we’re all friends.”

Aren’t booksellers incredible? In a note to the store’s Facebook followers Marko wrote that he’s doing well, though will be resting for several weeks, and the best thing the community can do to help is continue supporting the store.