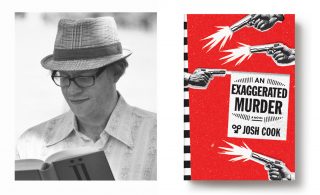 Happy Bloomsday, everyone! Today marks the 113th anniversary of Mr. Leopold Bloom eating with relish the inner organs of beasts and fowls, and to celebrate, we thought we’d take a look back at our erstwhile advice column, What Would Leopold Bloom Do?, which began two Bloomsdays ago, and ended last Bloomsday.

What Would Leopold Bloom Do was a column about life. Complex and confusing, filled with words you don’t know and people you don’t understand, life is even more difficult to navigate than Ulysses. But luckily, we have Ulysses to help us!

Expansive, generous, humanist, funny, and, of course, difficult, Ulysses can provide answers to the questions kicked up like so much dust as we traverse our day. Josh Cook, author of An Exaggerated Murder and Joyce expert, spent a few months dispense advice drawn from Joyce’s masterpiece. Just like Ulysses the advice was serious, silly, and, of course, dirty as required, but always thoughtful and honest.

Here are a few of our favorite moments in the history of What Would Leopold Bloom Do?:

What are the best recipes from Ulysses? (Trick question, it’s the kidney in butter or nothing.) —Impending Brunch in Quebec

There’s always Stephen’s classic hangover cure, “The Cabman’s Kickstart.” Simply stare with weary ennui at a stale dinner roll while insulting a cup of coffee. You’ll be back to feeling every gram of the relentless pressure of history in no time. (OK. You’re right, it’s kidney in butter.)

More important skill: perfect spelling or being able to knock out a horse with one punch? —Copy Editing on the Cattle Drive 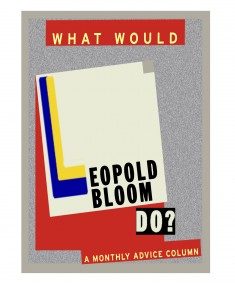 Oxen in the Sun is Joyce’s history of English literature through a tour of the various styles that defined the English language novel. This has always been the most difficult episode for me because, unlike Proteus (which quickly announces its difference by settling into Stephen’s brain) or even Circe and Penelope (both of which announce their difference through their format) Oxen in the Sun initially looks familiar, but most of it is written in now obsolete grammar. (Or maybe it’s the most difficult because it’s a bunch of posturing medical students drinking in a HOSPITAL and have to be shushed by a nurse because someone is trying to HAVE A FUCKING BABY like two doors down.) The most important idea, I think, that Joyce displays in this episode is not something specific about the history of English grammar, but that grammar itself evolves and changes. Grammar is not, nor has it ever been, an absolute system of laws. Grammar is not physics. It is, always was, and ever shall be, a system of agreements that facilitates communication. Commas go where they go and clauses go where they go because everyone agreeing on comma placement makes it easier for everyone to communicate.

Spelling, just like grammar, is an agreement that helps us communicate. As with grammar, the value of consistent spelling is not the consistency itself, but the ease of communication it facilitates. The gole of spelling is to communikate. As long as yor idea is undrstod, the spelling ov it is secondary. Someone will still rescue you from the deserted island if, in your dehyrdated, sun-baked, addled state, you accidentally spell “Helf” in rocks on the beach. Perfect spelling is really only valuable at spelling bees and, unless things have really changed, there are very few spelling bee-based fatalities. (Or at least spelling-bee related fatalities that would have been averted by perfect spelling.)

But if you need to knock out a horse, you better not miss. I mean, punching a horse isn’t like throwing a hand grenade.

Life without Plumtree’s meat is incomplete, but what is life without SPAM? An abode of bliss? —Scared of Sodium in Saskatoon Plumtree’s Potted Meat is a story about context. We know it’s a good enough product that the Blooms have some in their home (though one is allowed to wonder what “good enough product” is when we’re discussing shelf-stable meat in 1904), but Bloom’s attention is first drawn to it because it’s advertised (with a poem that doesn’t scan, mind you) with the obituaries. Bloom’s keen advertising eye notices the poor taste displayed by advertising for a “potted meat” company below the obituaries in the newspaper. Advertising is all about creating emotional associations and Bloom knows very few people will buy Plumtree’s if they associate its “potted meat,” with the “potted meat,” of dead bodies in coffins. For all we know, Plumtree’s Potted Meat is delicious (OK, there’s no way it was delicious. We don’t even know what kind of meat it is!), but the context makes it distasteful.

The Plumtree’s ad isn’t the only encounter Bloom has in which context influences his taste. We know that Bloom is fine with eating the nasty bits, and yet in Lestrygonians the sight of everyone else eating turns his stomach so that, though I’m sure he’s gotten on the outside of his share of pig knuckles, in this moment, with this context, that food is disgusting to him. So it’s a cheese sandwich and a nice burgundy for lunch. When we think about food in general and when we talk about what it means for food to taste “good,” too often we forget how important context is. Sure, the white table cloths and starchy waitstaff might not have any molecular effect on the food, but the context they provide absolutely affects how our brains interpret the taste of those molecules.

Spam might be the most context-dependent food in America. So here are some contexts you and your abode might be in and their relationship to bliss and Spam. This list is by no means exhaustive, but I believe its principles can extracted and applied to a myriad of other abode/Spam scenarios.

The Abode You Just Moved Into: Finding oven cleaner left behind by whoever moved out is one thing, but finding a can of Spam in the cupboard is baffling to the point of madness. (I mean, why didn’t they take it. It’s not like it’s going to go bad, right? Maybe it’s memory is bound up to a really bad break-up? Like it was a gift or something? I mean, they took everything else, so they must have left it behind on purpose…) So in this context, the Spam-less abode is much closer to bliss.

Your Abode is in Hawaii: In this case, a house without Spam would be incomplete.

A Zombie Apocalypse Bag in Your Abode: Only if an allergy prevents you from using that space for peanut butter.

You Promised You’d Impress Your Friends with Dinner in Your Abode and You Totally Spaced on It but You’ve Got Some Leftover Rice: Who’s making fun of Spam now? Stay with me here: dice the Spam, fried it up with the rice, a little oil to get the heat moving around, soy sauce (the only time I’d recommend using low sodium soy sauce if you’ve got it), maybe some kimchi or siracha if you’ve got that kicking around, and if you can control a few other aspects of the context (see what I did there) you will blow your friends mind. From then on your abode without Spam will feel incomplete.

“Does this look infected to you?” —Red Around the Edges in Rhinebeck Are you ready, Cincinnati!?

There is only one example in Ulysses of Leopold Bloom stopping his train of thought. He goes off on tangents, he changes direction, he moves on from topics, he is shocked by Gertie’s lameness, and though, there are moments when his thoughts trail into the wordless realm or when the narrator leaves his brain to consider other phenomena, only once does he actually grind the momentum of his mind to an absolute halt: when he starts to wonder if Blazes Boylan might give Molly an STD.

What makes Bloom such an interesting and important character is how he considers very little of life as “unthinkable.” Whether it’s rats eating bodies in the graveyard, the sensation of one’s own skin to the blind, or the roller coaster of fear, fantasy, excrement, and sexual fluidity in Circe, Bloom is open to considering pretty much every aspect of the human experience. So it’s odd that he draws a line at the clap. Or syphilis. This would be one thing if we were in Stephen’s sin-addled brain. The hellfire Catholic schooling erected barriers all over his brain, especially all over the parts of his brain that consider sex. But Bloom has not such barriers.

I believe an STD (from which one or both of them might end up sterile, maimed, mad, and/or dead) is unthinkable because at heart, Bloom is a reformer. The current of his thoughts, whether directly or indirectly, all flow from wanting to make the world better. In 1904, you couldn’t really reform gonorrhea. So not only are thoughts of an STD emotionally painful and physically scary, they’re also pointless.

Which is why, ultimately, we have professionals think about our potential diseases and infections for us, those who might actually be able to “reform” them.

But to your original question: If you’re still wondering if it looks infected a month after looking at it, then it’s infected. Badly. Probably also flesh-eating.