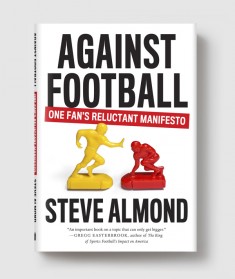 It’s been five years since we published Steve Almond’s Against Football, a treatise Newsweek called “a devastating multi-pronged attack against what [Almond] sees as the sins endemic to the sport’s business: shoddy economics, poor safety, homophobia, militaristic propaganda and extreme violence.” In it, he combines memoir, reportage, and cultural critique to work through his decision to quit watching football.

The game, on and off the field, has had a very interesting five years, marked by all of the above and more. Despite increased awareness of the risks inherent to the game, football still seems to be a uniquely dominant force in sports culture. We wrote to Steve to see how much of the game’s ongoing impact has affected him.

MH: Do you still avoid watching the games on Sunday, or have you relapsed?

SA: I still avoid watching games on Sunday, but it’s a struggle. Because football is pretty much everywhere—which you realize when you quit. It’s like being a drinker. Suddenly the world is one giant shot glass. Then again, the point of AF isn’t to tell people to quit. It’s to get them to accept the parts of football that are just undeniably ugly, and to accept responsibility as a fan. Our entire media is set up to distance people from their moral responsibilities, to see fandom as victimhood. That may be true emotionally, but economically it’s sponsorship.

MH: You told an interviewer in 2017 that you would get tremors when you’d have to abstain from watching. Is that still the case, or has it become easier over time to resist the game?

SA: Not gonna lie: it’s still tough. Because football was always a place of refuge, of escape. And now I have three kids, and debts no honest man can pay, and creative pressures. Plus, our democracy is coming apart at the seams. So yeah: I still need the escape. And football is just amazing in that capacity. The irony, of course, is that the forces driving our allegiance to football—the tribalism, the ingrained racism and misogyny, the zero-sum attitude—it’s all endemic to Trumpism.

MH: To what extent do you follow the national/social/political discourse around football? When the book came out you said to Tin House that football “represents America’s pathologies (of violence, race, masculinity, greed, etc.) writ large.” That seems true now more than ever, considering the saga of Colin Kaepernick, the domestic abuse cases involving Ray Rice and Tyreek Hill and others, even Robert Kraft’s here-today gone-tomorrow (it seemed to me) sex worker scandal. Even if you don’t watch the game, how much of the off-the-field hubbub is on your radar?

SA: Yeah, I follow those stories a little. But I see most of them as basically a distraction from the real moral issues when it comes to America and football. I love that Kaepernick wanted to raise awareness of police brutality and institutional racism. Until white people are routinely stopped and hassled and assaulted and killed by African-American police officers, all of us should be taking a knee. BUT. The truth is that the culture of football is part of that big institutional racism scam. Because the sport is predicated on telling poor kids—mostly kids of color—that the only reason they matter, the only reason they deserve a “college education” is because they can play a thrilling game that excites mostly white fans and makes scads of money for white oligarchs. The whole set up is a giant FUCK YOU to Martin Luther King, who saw violence as a dead end and wanted every child to be valued for the content of his or her character. Not their ability to sack a quarterback.

MH: If it’s true that “we vote with our attention and our wallets,” is it morally suspect to give the kind of stories above any kind of attention? Or is it a moral obligation? Or neither?

SA: Again, what I try to do is use those stories as a way of steering out of the moral cul de sac most of them enforce. That sounds complicated, but all I mean is that the sports media tries to put the focus on some individual player or coach or owner who screwed up. It’s a kind of scapegoating that locates the immorality (greed, abusive behavior, exploitation) within a single actor, who we all get to revile. But the entire football industrial complex is totally corrupt. So okay—yell at Bob Kraft and Ray Rice all you like. But also: recognize that your drooling fanaticism is what makes them so rich and famous.

MH: Lastly, are there any books, films, activities, or other sports that have filled the time and energy and attention that football used to command from you?

SA: I have three kids (13, 11 & 6) so whatever attention I was giving to football has been vacuumed up by familial duty, teaching, writing, editing, and my other side hustles. Honestly, the amount of time Americans spend in the thrall of sports, especially football, is symptomatic of our imperial decadence, especially as Americans. There’s a reason why Rupert Murdoch thought of Fox News as a network for football fans. And he’s made a fortune creating a sub-culture angry and lazy and self-pitying enough to place their faith in a fraud.

Buy Against Football from us, and save 30% off your purchase, now through January 1st!