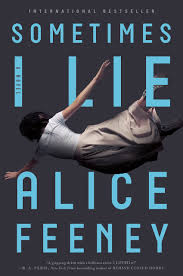 Remember when there were all those books being published that had the word “girl” in the title? Girl with the Dragon Tattoo, Girl on the Train, Gone Girl. (No judgment here; we published a book called The Girl in the Red Coat, which is excellent and you should read it if you haven’t yet.)

Well, Sometimes I Lie author Alice Feeney has her money on “lie” being the new “girl” when it comes to bestseller-making book titles. “Publishing, like every industry, has bandwagons that beg to be jumped on,” she writes for the Washington Post. “But I think this latest trend might be more than that. Perhaps the real reason we are drawn to reading and writing about lies is because, in a society divided by social, political and religious beliefs, lying is something that unites us — something we have in common.”

Big Little Lies by Liane Moriarty obviously leads the pack here (more than a million *print* copies sold, per BookScan), but the other recent examples—Mary Kubica’s Every Last Lie, J.T. Ellison’s Lie to Me, and Peter Swanson’s All the Beautiful Lies—don’t have nearly the sales to put them in the “girl” category. At least not yet.

Either way, the prediction that “lie” will become the new magic word when it comes to marketing and selling books is a lot less interesting than Feeney’s more subtle observation that lying, deception, and, oh I don’t know, “fake news” might be a particularly resonant theme for readers today. Whether or not publishers will (or should) try to capitalize on that with a one-word dog whistle remains to be seen.

My news, your news, their news... But whose news can we trust?