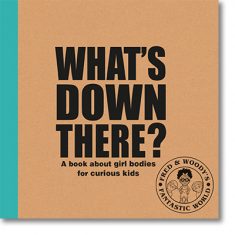 Authored by Cornwall based author Alex Waldron, the two books have come under fierce criticism for their titles in particular, the boys’ version being called That’s My Willy while the girls’ is called What’s Down There (the later written after collaboration with consultant Mandy Lancaster).

Rosemary Bennett, Education Editor at The Times was sent copies of the books last month, and took to Twitter to share her disbelief, saying: “Girls’ genitals considered so mysterious they don’t even have a name in these new books.”

Girls’ genitals considered so mysterious they don’t even have a name in these new books pic.twitter.com/kNb0EgoVp1

The Eve Appeal is the only UK national charity funding research and raising awareness into the five gynecological cancers, and they recently released a report saying that less a fifth of parents say “vagina” when talking to their daughters about their genitals and that that these parents felt it was not appropriate to use this language with their daughters until they were aged eleven or older. This distressing trend extends beyond childhood. The Eve Appeal’s research also revealed a shockingly low understanding of female genitalia, with 44% of women unable to identify the vagina on an anatomical diagram and 60% also unable to identify a vulva on the same diagram. Further research from Ovarian Cancer Action, as reported by the Metro, says that women aged eighteen to twenty-four would choose to Google symptoms rather than visit a doctor, as they were so embarrassed to talk about their vaginas—a serious health risk. Terrifying, but a reflection of what happens if, from childhood, women are being shamed into even naming or discussing their genitals. Ellen Scott at the Metro also highlights an insidious side of keeping children in the dark:

“Using cutesy words in place of the correct, anatomical word to describe body parts isn’t just highly annoying, it’s dangerous. Children should be taught from a young age about body autonomy and the area that other people are not allowed to touch without consent. They need to have it explained that if an adult or another child touches their genitals, they need to tell a trusted adult immediately. They need to know that this is unacceptable.”

“As the publisher we were amused and excited by Alex’s original book—That’s My Willy—that he’d written for Fred and Woody. When we then decided to also publish a book for girls, our starting point was that there really was no comparable word to “willy” when it came to the female body. We had all used/heard different words growing up and with the exception of Mandy Lancaster (who is a professional in this area) we’d never (or rarely) used the term vulva. When we asked friends and colleagues, every parent of girls was using a different “family” name, while across the board, boys were using the words “willy” or “penis”. Both Mandy and I (we’re both early 50s) also had memories of being told to “wash down there” and take care of “down there”. So, as Alex says, starting with the question “What’s Down There?” seemed a very good place to begin the conversation about the female body and introduce the correct names for the vulva and vagina.

“The words “penis” and “testicles” appear in That’s My Willy (“penis” also features in “What’s Down There”). And while the characters in the book for girls start out questioning, they all end the book understanding and using the words “vulva” and “vagina” correctly.”

“There was a bit of confusion over why we haven’t used the name of the girls’ parts in the title like we did with the boys, basically it is because there’s not really a girl equivalent to willy and the whole reason for What’s Down There is to address the mystery behind what we call it, to get people talking about it and make sure these kids are learning properly what their parts are called.”

To this effect, Ruby Tuesday replied to Bennett’s Tweet which set off the title criticism, saying:

“Please don’t judge our book by its cover. Far from skirting around the subject (pun intended), the book’s title was carefully chosen for the exact purpose of highlighting the confusion around the terminology for female genitalia … Inside the books you’ll see all the correct terms.”

It is reassuring to hear that in both books, eventually children are encouraged to use the correct anatomical names for genitalia, but why the cutesy nonsense words in the first place? And to that effect, why a book for girls and a book for boys? Do only girls need to know about vaginas… sorry, foo foos…? Covers do matter and they do get judged—let’s not be naive here. While these books are aiming to educate and allow parents to talk to their children about their bodies openly and honestly, which is of course commendable, the use of childish slang simply perpetuates the problem. As The Eve Appeal say, “We want people to know that saying the word vagina is not brave—it’s normal… Vaginas. Vulvas. Irregular bleeding. Bloating. Discharge. Menopause. They are not dirty words. They are part of life”

Let’s stop being so ashamed of our bodies and shout VAGINA with no fear.