If his vote to deny you and 21,999,999 of your friends health care doesn’t tell you enough about the guy, here’s a whole book by Jeff Flake Arizona Senator Jeff Flake is a man without a country. A “principled conservative” Republican, in 2018 he will have to defend his seat from both the left (newly energized after Arizona nearly turned blue in 2016) and the right (owing to his vocal non-support for Donald Trump). In fact, just three months into his first term, Flake became the least-liked Senator in America — a distinction that, until then, Mitch McConnell perhaps thought was the only thing that could be truly and lastingly his own in this world of loss and disappointment.

But Jeff Flake does have a country, and that country is America — or so we can expect to read in his forthcoming book / manifesto, Conscience of a Conservative, which was kept secret until a few days before its August 1 on sale date.

According to Alexander Burns for the New York Times, Flake “has secretly planned an unconventional campaign kickoff that risks intensifying both threats: Working privately, and largely without the knowledge of political advisers, he has written a book that amounts to an ideological manifesto for his own version of conservatism, according to three people briefed on the manuscript who discussed it on the condition of anonymity.” See how these leaks and tips are supposed to work? As marketing.

The book, it seems, will largely be about where the Republican party lost its way on the long march from the Barry Goldwater tradition, which non-Trumpers like Flake very much hope the 2018 Senate races will be about. With the Trump White House grooming Republican candidates to run against Flake, it makes sense that the junior senator would take matters into his own hands and write a manifesto to get his message out. 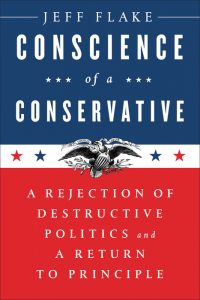 More than your average political scribbler, though, Flake really brought a Goldwater-style self-reliance to the book-writing process. As Burns puts it, “While many politicians write books, it is highly unusual for a senator to do so without extensively consulting advisers, particularly when the subject matter is so politically charged.” He also brought a Goldwater title to the book writing process — the 1964 presidential hopeful also wrote a book called Conscience of a Conservative.

Congrats to Senator Flake. Hopefully, beginning in 2019, you will have plenty of time to devote to your writing career!