When word came last Tuesday night that Philip Roth had passed away, I reacted inappropriately. Gentle reader, would you think less of me if I confessed that upon receiving the sad news, I speed-dialed my agent and conferred with publicists?

Within hours, journalists were contacting me in quest of broad, retrospective-y insights. Editors inquired about pending projects. Acquaintances wrote to express their condolences. Given how bereft of excitement a professor’s life can be, I sort of wished Philip Roth would die more often!

This is a peculiar—perhaps unconscionable—reaction, no? Roth is a writer I have researched and pondered for decades. At Georgetown University I teach a seminar solely devoted to his massive oeuvre. When learned detractors skewered the man, I publicly defended him. I obsessed over Lena Dunham’s obsession with him. I even work for the journal Philip Roth Studies. In light of these investments, what accounts for my ambivalence and irreverence toward his passing?

That’s the question that I—and, admittedly, only I—am asking. Yet I hope the answers will interest those who seek a post-mortem that steers clear of the sycophantry and myopic hot takes we’ve seen over the past week.

Because Philip himself would have expected nothing less (or more).

One explanation for my muted response to Roth’s death is that I am, well, a Rothian. As such, I am allergic to so-called “normal,” or “healthy,” emotional responses.

A Rothian hero processes pain in unique ways. Think of Sabbath’s Theater: when the grieving protagonist visits his lover’s tombstone, he masturbates on her grave (only to run for cover and subsequently witness another grieving lover “scattering his seed across [her] oblong patch of Mother Earth”).

Other of Roth’s heroes have been known to dissociate during duress. They remove themselves from a complex situation and ponder it as if it were a fiction to be written. Roth’s alter ego, the novelist Nathan Zuckerman, couldn’t properly mourn at his brother Henry’s funeral in The Counterlife. Instead, Nathan spent his shiva call scouring the room for Wendy — the young dental hygienist with whom the deceased Henry was having an affair. Nathan prioritizes the story over the sorrow. “This profession,” laments the author, “even fucks up grief.”

Roth’s characters follow their own dark psychic impulses — and if that turns them into depraved, aloof, emotionally stunted, sons a’ bitches, so be it!

Because Roth has spent decades readying us for his death. Then again, maybe Roth’s fiction itself is to blame for my inappropriate affect. Philip Roth wrote twenty-nine novels. Having read them all numerous times, I am struck by one recurring narrative arc: after a (usually) auspicious start in childhood, life gets progressively worse.

And then you die.

I’ve always wondered if Death himself, adorned with sickle and scowl, wasn’t standing over Roth’s shoulder during each day’s grueling writing sesh. Want to know how a mortician sucks out your inner organs? How a gravedigger prepares your final resting place? Read Sabbath’s Theater and Everyman.

Roth repeatedly used his fiction to explore his own physical and psychic dissolution (see The Anatomy Lesson and Operation Shylock), as well as his own demise. Nathan Zuckerman died (well, sort of — it’s complicated) in The Counterlife and wrote his own eulogy. Twenty years later we watched him edge into death in Exit Ghost. It’s hard to mourn for a person when he’s spent decades mourning for himself!

Because Philip Roth lives! (As a ghost.)

For a self-professed atheist, Mr. Roth sure had a soft spot for the supernatural. His storyworlds are pervaded by ghosts. In real life he was no less irrational. According to Richard Stern, Roth frequently visited the grave of his friend Janet Hobhouse, speaking with her, confiding in her, and even soliciting her advice. This jibes well with what Maria Zuckerman, wife of the fictional Nathan, once concluded: “I now know what a ghost is. It is the person you talk to. That’s a ghost. Someone who’s still so alive that you talk to them and talk to them and never stop.” Maybe, that’s why I’m at peace with Roth’s departure. My conversation with Philip is about to begin!

Because the #MeToo Movement demands that we reevaluate.

Philip Roth chronicles precisely this urge. Just a few months back, Roth was telling the New York Times that he focused on “men responsive to the insistent call of sexual pleasure, beset by shameful desires and the undauntedness of obsessive lusts, beguiled even by the lure of the taboo…”

To Mr. Roth’s point, I think of Alexander Portnoy pleasuring himself on a bus alongside the unknowing teenage girl upon whom he fantasizes. I think of Nathan Zuckerman in My Life as a Man fleeing to Italy to live with his teenage stepdaughter Monica. I think of a woman in The Great American Novel being thrown off a boat by a Hemingway-like character who refers to her as a dirty slit (not a slut, mind you: a slit). Are these men merely “responsive to the insistent call of sexual pleasure”? Or, are they plain old creepers? Could Roth tell the difference? 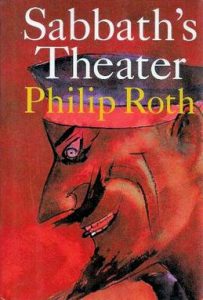 Because the man was unknowable, unembracable.

The paradox is that while Roth seemed to be exposing himself on every page, the author of flesh and blood was inscrutable to outsiders. He was often portrayed as a lonely, Salingeresque recluse. Yet, I remember rummaging through a large box of his personal correspondences in the Library of Congress that suggested otherwise; as far as I can tell, this man was the life of the freakin’ party.

Who was he? Who knows? Until a critical, independent biography is published—something Roth did not seem to want—we will have to make do with indirect reports. Those seeking non-Roth-sanctioned portraits of Roth might consult Janet Hobhouse’s The Furies (Roth as self-absorbed lover), Claire Bloom’s Leaving a Doll’s House: A Memoir (Roth as psychotic misogynist), and Alan Lelchuck’s Ziff: A Life? (Roth as Mephistopheles).

It would be unRothian to simply accept these reports as fact, just as it would be unRothian to ever believe Roth when he claimed, again and again, that his fictional doppelgangers had nothing to do with him. The sincerest tribute I can pay the man is to think as he would, to think Zuckermanically. This means that I shan’t shed a tear. But I shall write about the experience of not being able to shed a tear upon the death of Philip Milton Roth.