I used to hate facial hair. But then it grew on me: new book of Dad jokes, coming soon. 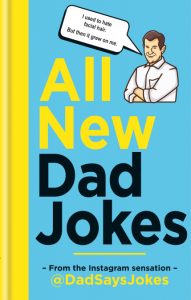 I don’t know about you, but I could do with a little light relief right now as the world turns to garbage. Boris “Piccaninny Watermelon Letterbox Cake Bumboys Vampires Haircut Inconclusive-Cocaine-Event Wall-Spaffer Spunk-Burster Fuck-Business Fuck-The-Families Get-Off-My-Fucking-Laptop Turds” Johnson is Prime Minister of the UK, Trump continues to lie, cheat, and abuse and get away with it, and we’re told we have rather than 12 years, we have 18 months to save the planet from the irreversible effects of climate change. What better way to distract oneself from grim reality than enjoying a good joke?

@DadSaysJokes has 1.3 million followers on Instagram, 100,000 on Twitter, and 513,000 on Facebook. Created by father-and-son duo Kit and Andrew Chilvers, they simply post jokes of the “dad” variety, both of their own creation and submitted by followers—you know the sort: groan-worthy, often so unfunny they’re hilarious. In 2018 Cassell, part of Octopus Books, published Dad Jokes: The very best of @DadSaysJokes which sold 28,667 UK print copies according to Nielsen Bookscan. Now a second book is coming: All New Dad Jokes is publishing this September.

On the forthcoming new book, Andrew said, as reported by Mark Chandler at The Bookseller: “Unbelievable as it may sound, our dedicated communities on Instagram, Twitter, and Facebook have said they’re keen for another volume of cringeworthy jokes. So here it is fellow japesters—just be careful what you wish for.”

The joke to appear on the front over was voted for by followers, the winner being the simple word-play jibe: “I used to hate facial hair. But then it grew on me.”

To whet your appetite, here are 10 of my favourite jokes from @DadSaysJokes that pleasantly distracted me today, making me chuckle at my desk.