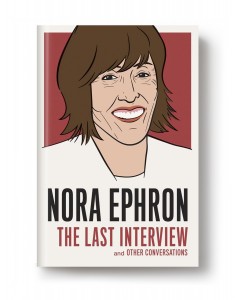 Because it’s Valentine’s Day and also the seventy-third birthday of Carl Bernstein, Watergate reporter, Hillary Clinton ghost writer, and CNN commentator, why not reprint some of his ex-wife Nora Ephron’s last interview, discussing their divorce with the Believer’s Kathryn Borel a few months before her death? The Bernstein-Ephron break-up was the inspiration for Ephron’s first novel, Heartburn, which marked a turning point in her career when it was first published in 1983, and subsequently adapted to a film starring Meryl Streep and Jack Nicholson.

Like Ephron herself, Heartburn’s protagonist, Rachel, discovers her husband’s infidelities and, as Elisa Albert describes it in her fabulous introduction to Madeleine Bourdouxhe’s La Femme de Gilles, she “refuses to stay put. She dynamites their life together, tells all their friends, moves out, and spends the rest of the novel riffing hilariously on romance, identity, culture, sex, love, family, food, and money.”

BOREL: Not only do you have a history of making the difficult moments of your life into very funny creative pieces, but also they’ve turned into some extreme career triumphs for you. Heartburn, which was about the dissolution of your marriage, was a wild success, for example. When you were writing it, did you think, I will be vindicated?

EPHRON: No. [Pause] I’m going to say something that is not an answer to your question, but it is something I think about. When I did this play called Imaginary Friends, about Lillian Hellman and Mary McCarthy, I was very interested to realize that they had both burst out of the crowd by writing things that were shocking. Lillian Hellman wrote The Children’s Hour, which was about lesbianism. This was in 1930-something and nobody ever talked about that. Mary McCarthy wrote something called “The Man in the Brooks Brothers Shirt,” which was about having casual sex on a train. That was another thing that nobody wrote about. I realized you could look at the careers of many women writers and see that moment where they did “the shocking thing.” If you look at Gloria Steinem and the Playboy Bunny piece, or Joan Didion, who wrote about Hawaii and trying to decide whether to get a divorce or not… I could go on and on.

That moment, for me, was not Heartburn. It was a piece I wrote in Esquire called “A Few Words about Breasts.” I knew when I finished writing that piece that either it was going to be a huge success or be judged as a kind of “Who needs to know any of this?” kind of thing. One or the other was going to happen, but I absolutely knew that both were possible. By the time I did Heartburn, I was around forty. I had a very clear memory of being at my typewriter in Bridgehampton, where Carl and I had had a house—that was now in the divorce—but we were still using it at alternate times. I was supposed to be writing a screenplay. And when I started writing, sixteen pages of that novel came out in two days. I thought, Oh, I’ve found it. The whole time the marriage was breaking up and I was in a state of complete torment and misery, I knew that this would someday be a funny story. I absolutely knew it. It was too horrible. It was too ridiculous not to be.

BOREL: Too horrible to not be interesting.

EPHRON: Yes. You know, even at the time, I was able to not be too horribly victimish about the whole thing. I just don’t have that thing. I’m really opposed to it. And I have friends who, four or five years after a divorce, are still complaining about it, or still in court, or still tied in crazy ways to the experience of the end of their marriage. I just have no patience for it at all. I feel terrible for them, but I am very impatient about it. It’s like “Move on, get over it, this is it.” You know?

BOREL: There’s that great Nietzsche quote: “A joke is an epitaph on the death of a feeling.” Making a joke is a good way of removing poison from a moment.

EPHRON: Sure, but it’s not the only way. If you look at The Year of Magical Thinking, for example, that is absolutely not turning a tragic event into anything at all amusing, but instead just turning it into something good.

BOREL: Do you ever find yourself unable to truly feel a moment because you’re busy thinking, This will be a story?

EPHRON: Not when things are really bad.

BOREL: But when things are on the verge?

EPHRON: Yes, absolutely. When Carl and I were in the middle of breaking up and we were still together, and he had fallen in love with the wife of the British ambassador, her husband—who was a very, very important political human being—called me. He said, “I think we should get together.” And so I said, “Yes. We must.” And I asked him where should we get together, and he said, “Someplace out of the way.” And I said, “But we’re not having the affair! They are!” Anyway, we settled on a Chinese restaurant on Connecticut Avenue. And when we met in front of the restaurant, we fell into each other’s arms, weeping. I was pregnant, and it was so horrible, and I said, “Oh, Peter, isn’t it awful?” He said, “Yes, it’s just awful… What’s happening to this country?” And you know, I didn’t stop crying, but I thought, Oh, that is hilarious. I knew someday I could use that. And it’s in Heartburn! The point is: It doesn’t mean I wasn’t a complete basket case, but if you are a writer that is what you do. That’s what your life is for, to feed the animal.

BOREL: Does it make you greedy for those moments, do you think?

EPHRON: I think it makes some people greedy for those moments. Tom Wolfe once said this really brilliant thing. This was about thirty years ago. He was giving a speech about reporting, and how important it is for a writer to keep reporting, and to be able to get outside their self. He said that “some fiction writers”—and he was clearly referring to Philip Roth—are like Charles Lamb’s essay on a roast pig, which is that they think they have to burn the house down to cook the pig. What he was talking about was Philip Roth going through one woman after another, and writing one book after another about them. You cannot in any way—thirty years later—say that Tom Wolfe was right about Philip Roth, because his body of work is just too fantastic. But he is someone who, if he gets cancer, he puts it in the next book. I think for some people it’s a very short distance between it happening and it becoming a book. I think some people probably create a certain amount of uproar in their lives in order to have the next thing to write about. But I don’t think I ever did that.

The complete interview, and others, are available in Nora Ephron: The Last Interview and Other Conversations.