I had not thought Moby-Dick had enschlocked so many 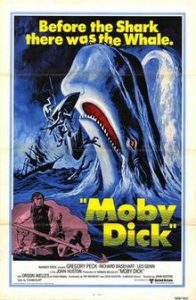 At the risk of missing the point here, this is a really strange tagline for this movie. Sharks predate whales, and this movie predates notorious anti-shark propaganda like “Jaws” and “Jabberjaw.” What are they even talking about? But I digress.

There are many misguided-seeming adaptations of Moby-Dick out there. Recently, we discovered a particularly goofy one. Rejoice: there are countless more. There are operas, Saturday morning cartoons, overly-serious-but-pleasantly-PBS-scented documentaries, and, best of all, there is schlock — some pretty garbagey-looking movie adaptations that some pretty honorable people have been involved with.

For example, look at this good-spirited-but-always-already-exhausted-seeming version, starring Ethan Hawke, Gillian Anderson, and Donald Sutherland. The director behind this, Mike Barker, has more recently been making episodes of Hulu’s Handmaid’s Tale adaptation. It’s a miniseries from 2011, and it just seems really superfluous.  Which is to say, it is joy. “This is ridiculous,” their eyes scream, “but what could I do? Moby-Dick is every actor’s dream.”

And what about this 1998 version, co-executive produced by Francis Ford Coppola, starring Patrick Stewart as Captain Ahab? P-Stew, of course, is a class act, and this may scratch a certain nostalgic itch among a particular swathe of humanity that longs for a return to the USA Network’s Begottfrieded heyday (I mean, probably), but beside that, it is of little use to a free people:

But schlock adaptations aren’t all. Just last week, the amazing John Kilduff released a video of himself painting a portrait of Moby Dick while working out on what I think is a Nautilus machine:

And then, of course, there’s Maybe Dick, The Wailing Whale: