Hugh Hefner’s death last week has prompted an outpouring of obituaries that are both tributes and rebukes. He certainly was a complicated figure, distorting sexuality as much as he liberated it, supporting important social causes while simultaneously perpetuating a culture that enthroned the white male ego. Playboy Magazine, the crown jewel of his brand, popularized a pornography industry that had long been hush-hush. The magazine became known for featuring centerfold female nudes even as Hef attempted to engage a range of gentlemanly interests. Thus was born the popular excuse, “I just read it for the articles.” Journalism, art, interviews, cartoons, and fiction appeared between bunnies, confounding the naysayers and delighting readers in more ways than one.

Hef himself had a background in writing, having started as a copywriter for Esquire. Leaving that men’s mag after a salary dispute, he took out a loan and raised money—from his mother, among others—to start his own. With his not insignificant experience, he knew how to make a magazine enticing for male audiences.

While the journalism, interviews, and fiction never seemed to come from Hugh’s direct influence, he knew that they were necessary for creating a gentlemanly gestalt. When asked in a 1985 interview by Jonathan Roberts what he liked to read, Hef simply responded, “My favorite movie would be very easy to talk about… I was probably the first major McLuhanesque editor in that my growing up in the ’30s and ’40s was influenced far more by film than by books.” His favorite movie was The Maltese Falcon.

Early on, as Josh Lambert reported in Tablet in 2010, Hef was frustrated and disappointed by anti-semitism and stifled by the hiring practices at Esquire. In response, he happily hired some of the country’s top Jewish editors: Nat Lehrman, Sheldon Wax, Arthur Kretchmer, and August Comte Spectorsky. But Playboy didn’t become a prestigious venue for literary writing until the sixties, under the eye of editor Robie Macauley, who attracted bylines from some of the greatest science fiction writers of the day — Arthur C. Clarke, Ray Bradbury, Isaac Assimov, and many others. With numerous Nebula nominations and wins, Playboy became synonymous with quality sci-fi. 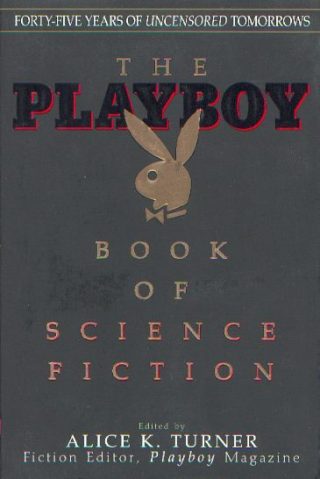 This all wasn’t without some expected sexism. Reviewing a list of contributors over the years, white men make up the vast majority of Playboy voices.

In her book Trainwreck, Sady Doyle notes that, for the first issue of Playboy, Hefner “leaked [Marilyn] Monroe’s nudes before the phrase ‘leaking nudes’ was even in the lexicon.”

Another story concerns the legendary Ursula K Le Guin. Since Playboy targeted male readers, editors worried that a story written by Le Guin, now a legend but then a struggling newcomer, would not be well-received once readers realized it came from a woman. They asked Le Guin to publish the story under the name UK Le Guin. Her byline read in full, “It is commonly suspected that the writings of UK Le Guin are not actually written by UK Le Guin, but by another person of the same name.”

Alice K. Turner, the most famous of Playboy’s fiction editors, kept up the magazine’s quality for almost half a century, inserting some class into the endeavor. Bringing in Murakami, Wallace, and Atwood enabled the magazine to achieve a level of literary renown normally reserved for staples like the New Yorker and Paris Review. Turner is noted for recording a comment of Hef’s toward some centerfold models: “Without you, I would have had nothing but a literary magazine.” Not exactly an appreciative nod to the writing.

Public perception seems to be that giving expression to Hef’s lustful and extravagant persona was the main ambition of his work, evident in silk smoking jackets, groomed mansion lawns, and young models. To try and argue otherwise seems foolish. But it is not without some appreciation that writers have cashed Playboy checks and gone on to greater things. The exposure surely was valuable too — the magazine enjoyed a circulation of more than seven million during its heyday. By proximity to sex, a lot of really good fiction made its way into the world.

Much of that fiction is now available in the Playboy archives, which has been digitized and put online for free.