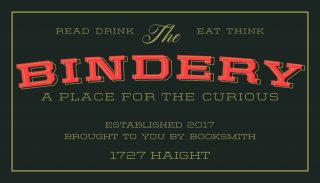 Christin Evans bought the historic San Francisco bookstore The Booksmith in 2007. In the ensuing decade, both the demise and the triumph of the indie bookstore scene have been frequently touted. And through it all, Booksmith has remained a bellwether for how indie bookstores can do more than just survive: they can flourish.

Last week, Booksmith opened a satellite location called The Bindery, which combines an event space with an exciting new concept in indie bookselling, the Arcana Project. An announcement on the Booksmith website explains:

The event parlor will have a beer and wine bar and a full service café, and will be available to rent 7 days a week for all manner of events, both literary and otherwise.

The Bindery will also be a living full-service bookstore featuring an experimental keystone, The Arcana Project: a deep, highly inclusive array of books—fiction and nonfiction, from all over the world—presented in chronological order, by the date they were written.

We reached out to Christin and her staff—book buyer Camden Avery, kids’ book buyer Lauren O’Niell, and events director Amy Stephenson—and they collaboratively answered some questions for us:

Opening a second, quite different business, in a new storefront, is a massive undertaking! What went into making that decision, and why now? Had you been thinking about it for long?

We’ve been looking for opportunities to expand for a few years now, and this is a lucky opportunity that paid off with that persistence. Our core team been working together for more than eight years. That’s allowed us to work collaboratively to build and execute on the concept almost seamlessly — and it’s been a lot of work, but also we have enjoyed the creative process of building something new. The Bindery is described as a “dedicated events parlor with a full-service bookstore” and bar. How do you hope and imagine the space will be used? Are you accepting bookings yet?

Yes! We’ve been booking the space even before it’s officially open as a bookstore. It has a really wonderful history as an events space — as the Full Moon Saloon, and then as the Red Vic Movie House.

It’s an opportunity for us to expand beyond standard literary events with an author at a podium, and into different types of events our existing bookstore might not be able to accommodate, like classes, comedy, gatherings, events for kids, film screenings, and more non-traditional types of readings. Really, we’re hoping it’ll be different every night.

We’re hoping people take advantage of the space as a place to connect, come together, linger, and discover something unexpected.

The Bindery is also home to an “experimental keystone” called The Arcana Project — a new concept that’s certainly intriguing! How did you come up with the idea for an eclectic, world-history-spanning selection, arranged in chronological order? It sounds somewhere between a museum of ideas and a bookstore.

Exactly — we’re looking to play in the space between exhibit and shop. We all love bookstores, and we were trying to think of a kind of bookstore that doesn’t exist yet, one that really demands surrendering yourself to the space. What will it be like to be able to browse in a space where you don’t think you know where everything already is? We don’t know, but we’re excited to find out. In return, we hope the space will become a changing, permeable body of literature that can offer up surprises and reveal things that have been forgotten, hidden, or lost.

That’s a wonderful observation. The two projects are perhaps connected loosely, but not deliberately. It’s certainly true in the sense that we’re embarking on something that’s open-formed, unfinished, incomplete. We’re really drawn to the idea of representing a body of knowledge that confesses to being constantly open to revision, elaboration, improvisation.

The fact that the Bindery will be just two blocks from Booksmith really seems to underline that the main concerns here are not purely commercial, even though I imagine you’d be happy not to lose money on it. Do you see this as an art project? A kind of 21st-century athenaeum?

This builds on the quality event programs we’ve been doing down the street. The new space offers us a way to expand on what has been a draw at Booksmith, and to be a different kind of bookstore — one with events booked seven nights a week, a bar, a café, space enough to read and linger. Especially now, our neighbors crave space for community connection. The Bindery is meant to feel like a gathering around a café table (ours will be intimate & round), a bar which will feel like your quirky college professor’s well-appointed room lined with bookcases filled with all the books you want to read. The chronological timeline of a book is a starting point for interesting conversations about what we’ve been reading that we want to share with our friends. Are there any books whose inclusion in the Arcana Project has proved particularly controversial among you? Were there any that you knew right away would need to be included?

The givens—Mastering the Art of French Cooking, say, or Henry Fielding—were pretty straightforward for us. The more controversial titles (think Mein Kampf) have certainly prompted some discussion, but that’s kind of the beauty of the project: we’re going to learn what kind of histories we’re building as we go, and see how books find their place.

Presumably, Booksmith will have the larger selection of books, but are you stocking any titles at the Arcana Project that Booksmith doesn’t carry? How much overlap and non-overlap in stock are you anticipating between the two locations?

We’re trying to keep overlap to a minimum, simply because the opportunities to increase a bookstore’s raw title selection come along so rarely. There are many, many books we’ve discovered in the process of working on this project that we haven’t carried at the main store — and many more that we had never heard of before — but that we’re able to feature and give new life in a different setting.

Booksmith made news earlier this year when an unnamed benefactor bought customers free copies of 1984, The Handmaid’s Tale, and In the Garden of Beasts. You displayed them in your store with a sign that read, “Read up! Fight Back!” How do you feel about the current relationship between politics and bookselling, and how can we expect to see that represented at the Bindery?

The way we’ve decided to work with time at the Bindery was born partly out of trying to make sense of where we are, what the world is, and this desire to see where we might choose to go from here. And absolutely, the things we’ve been learning this year that we think are critical for a bookstore—shepherding and making available a wide array of voices, stories, thoughts, dreams—have shaped what we want in a new store. Having as complete a cultural context as we can build is a great solace, in that sense, and it’s also exhilarating to see all the wonderful, horrible things people have been up to for the last few thousand years or so.

The Bindery is located at 1727 Haight St., San Francisco. More information can be found here. 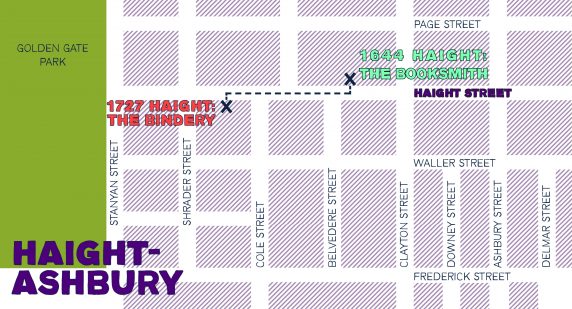