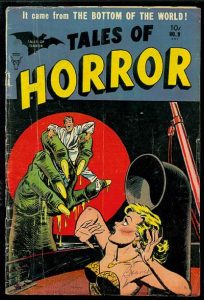 Sure, we all know about the Little Shop of Horrors. But what about a little bookshop of horrors? For that, dear friends, look no further than Dark Delicacies, an independent bookshop in Burbank, California specializing in horror, which has been open since 1994.

According to a report in the Guardian by Allison Flood, Dark Delicacies has recently been in danger of shuttering its doors due to rising rent costs and financial strain. Del Howison, the store’s co-owner, launched a GoFundMe in an effort to raise enough money to move the bookstore to a new, nearby location. He wrote:

“We knew we would never become rich running the store, and that was okay. We just wanted to be able to do something we loved and be a part of the community we cherished… We resigned ourselves to the fact that we would be forced to close, just shy of our 25th anniversary. We were heartbroken. Then, a store front around the corner became available. A possible new location, coupled with all the people who wrote and stopped by asking us to stay in business, made Sue and I realize we weren’t ready to go quietly into the night.”

And like a horror movie where the Final Girl is still standing in the end, Dark Delicacies was able to reach its goal with the help of major members of the horror community stepping up and lending a hand. Academy Award-winning director Guillermo del Toro tweeted his financial support for the bookstore to his 1.6 million followers, urging them to do the same. Flood writes that novelist Neil Gaiman offered his support as well, calling the store a “wonderful bookshop,” and that the two of them were joined by Cory Doctorow, author and creator of the popular website BoingBoing. Doctorow dedicated an entire post on his site to the fundraising efforts.

As the horror community rallied behind a long-standing institution of the genre, Dark Delicacies was able to raise $24,000 in four days. (Their original goal had been $20,000.) Howison writes that this money will go towards the demo and partial build-up of the new store. Additional money donated will go to finishing the building and help with the actual relocation.”

This isn’t the first time we have seen industry professionals within a community step up to help genre bookstores from shuttering their doors. That these stores are in trouble in the first place isn’t due to a lack of interest from consumers, as evidenced by the thousands of dollars crowdsourced in order to help keep them open, but mostly thanks to rising rents and unsympathetic landlords. Just another reason to support your local—and your genre—independent bookstores.  Dark Delicacies’ GoFundMe is still open if you’re feeling generous.