Hey, our Fourth of July Sale has officially begun!

As every student of American history knows, it was July 4, 1776 when George Washington first stuck a feather in his cap and proclaimed, “Let us enjoy a massive discount on all goods this weekend — because what is a nation for, if not big, big savings?”

Nearly two centuries later, it was Richard Nixon who famously said on July 4, 1974, “I am not a crook — but these low, low prices are the next best thing!”

For that matter, if the United States had a president right now, we’re pretty sure that person would have said some pithy things, too.

Anyhow, in the grand tradition of Independence Day savings, we’re excited to announce that our Fourth of July Sale is already underway. Through Tuesday, everything we sell—every book, shirt, tote, and mug—will be available for an additional twenty percent off our already discounted prices, for a total savings of forty percent. Forty percent? Forty percent! How’s that for fireworks?

Just proceed through your purchase as usual, and the discount will be automatically applied to your books at check-out. (Shirts, totes, and mugs are already marked down, and you’ll be charged dizzyingly low prices for them as listed.)

Three books carefully selected to keep you sane in crazy times — about how we can take back power, what we might want to do with it, and what that may feel like. By the dawn’s early light, you can get all three for just $28 through Tuesday.

The “Every Man Totes Alone” Bundle

We’re pairing Every Man Dies Alone, Hans Fallada’s peerless novel of a lone, courageous German couple standing up to the Nazis, with our Hans Fallada Resistance tote, emblazoned with a single sentence that distills the book’s message to an urgent, elegant statement: The main thing is, you fight back. God shed his grace on the fact that you can get ’em both for just $20 through the fourth. 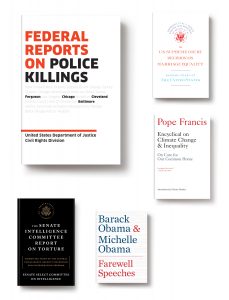 Whether you regard America in a spirit of tough love or open insurrection, you’ll want to have these five books handy: the Department of Justice’s reports on police killings in Baltimore, Chicago, Cleveland, and Ferguson; Pope Francis’s encyclical on climate change and inequality; the Senate Intelligence Committee’s report on CIA torture programs; the Supreme Court’s decision establishing marriage equality across the US; and the farewell speeches of Barack and Michelle Obama. From now until the grill cools off, we hold this price to be self-evident: $42 for all five.

And it’s not just these! Everything we sell—every novella! every last interview! every cookbook! every record of an astounding novelist’s dreams!—all of them are marked down for a total savings of forty damn percent, until twilight’s last gleaming on Tuesday.

Get on it, friends.