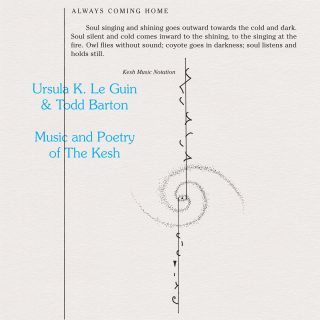 In 2016, Arrival declared that the power of linguistics had come of age as a popular concern in sci-fi. (RIP, Jóhann Jóhannsson.) As in Story of Your Life, the Ted Chiang novella on which the movie was based, much hinged on the humans’ ability to grapple with the profoundly alien conception of time embedded in the heptapods’ language — one that expressed perfect, eon-spanning determinism.

That popularity was possible only because it was a theme that had been developed by sci-fi writers for decades, and Ursula K. Le Guin was one of the major forces behind that development. In her 1969 novel The Left Hand of Darkness, earthling Genly Ai learns the alien language of the planet Gethen, but can’t understand it through the mysteries of the surrounding culture. In 1972’s The Word for World is Forest, two civilizations cannot find a way to communicate because they perceive reality so differently. 1974’s The Dispossessed, features one language that stands for anarchy itself!

Perhaps Le Guin’s greatest achievement of speculative linguistics comes in her 1985 hybrid work Always Coming Home. In it, Le Guin elaborates the language of the Kesh, a cultural group living around northern California in the distant aftermath of a future apocalypse. In contrast to the hegemonic constructions of most languages, in which the speaking subject constantly takes possession of their surroundings, Kesh imagines a more harmonic syntax.

In Dancing the Tao: Le Guin and Moral Development, poet and scholar Sandra J. Lindow writes, “The Kesh by definition, belong to themselves first. Their language is one of connection, relationship and domestication rather than power and control.”

The Kesh people do not dominate anything. They have no government. They don’t own land or consider themselves masters of nature. Labor is a force of survival and community, not a site of exploitation. Life itself is sacred and religious; metaphysics doesn’t exist. Within the language, there is only a kind of science and mythology.

As Le Guin writes in her gloss on the Kesh word “Heyiya”:

The cosmos, the universe, was usually referred to rather casually in Kesh as rruwey, “all this.” There was a more formal and philosophical word, em, meaning extent-and-duration, or spacetime. Energy in the physicist’s sense, the fundamental power interconvertible with matter, was emiye.

Ostouud described weaving of the weave of a fabric, bringing together, relating, and so was used to mean society, the community of being, the fabric of interdependent existences.”

Le Guin uses the words of Kesh to explore the Kesh mentality. Then she collects samples of (invented) Kesh poetry and music make things emotional. The poem “Not Being Singleminded,” “translated” into English, explores the connectedness described above. It begins:

No god no king no One no thing
that comes one at a time
no dupli repli multi identiplication
prolifer proliferation same after same
so no city. Sorry.
Here
is no away to throw to.

Harper and Row’s original publication of Always Coming Home came packaged with a cassette tape. The Buchla stylings of Todd Barton created an aural landscape of the Kesh imagination, with traditional Kesh instruments mentioned in the text, like the Houmbúta, a seven-foot horn, and recordings of Kesh poetry being recited.

Fortunately for fans the world over, the album will be re-released next month, including its first-ever pressing into vinyl. Miles Bowe at FACT writes, “The reissue process was supervised by Le Guin, Barton and their literary agent, with the final release being approved by the author’s surviving family. The release comes with Le Guin’s illustrations from Always Coming Home printed on the jacket, a reprinting of the original lyric sheet and new liner notes from writer and a long-time friend of Le Guin, Moe Bowstern.”

In Le Guin’s 1976 YA novel Very Far Away from Anywhere Else, the narrator and protagonist Owen comments, “It had never occurred to me before that music and thinking are so much alike. In fact you could say music is another way of thinking, or maybe thinking is another kind of music.” In Always Coming Home, Le Guin carries this idea impressively far.

Still, while the music adds an absorbing (and beautiful) layer to the novel, it’s the invented language of the Kesh through which Le Guin performs her most serious analysis — and that makes Kesh culture one of the pillars of Le Guin’s legacy.

Bonus track: electronic musician Álvaro Barriuso, of the group Dúo Cobra, put out an album of his own Kesh music in 2016. Here, hear: