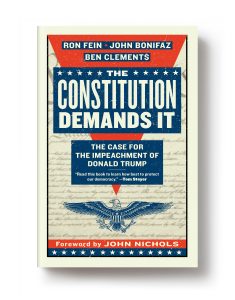 We’ve written about it before, and we’ll write about it again: we need to impeach this president. Yes.

Veteran constitutional attorney and legal scholar Ron Fein put it pretty well in an op-ed he wrote for the Washington Post last week:

We don’t yet know precisely why Trump is so submissive to Putin. Perhaps the Russian intelligence services have compromising information — if not the “pee tape,” then evidence of criminal activity at Trump’s businesses or in the 2016 campaign. Perhaps Trump’s admiration for the “extremely strong and powerful” Putin masks deeper insecurities. Or perhaps he is simply dependent on Russian money for his personal finances. In any event, the fact that Trump is seemingly incapable of criticizing or responding to Russian aggression indicates that  Russia has some sort of hold on Trump. In the wake of Helsinki, even Republican Sen. Ben Sasse dodged a question from a radio host as to whether Putin has kompromat or compromising information on Trump, instead of ruling it out.

Overall, the evidence suggests that Trump has “betray[ed] his trust” and justifies an immediate impeachment investigation.

Trump’s betrayal may not meet the technical definition of “treason,” but it certainly carries the stench of “treachery,” and that is grounds for impeachment. Tom Steyer with Bonifaz, Clements, Fein, and The Constitution Demands It.

Fein is the co-author, with fellow constitutional attorneys and Free Speech for People staffers John Bonifaz and Ben Clements, of The Constitution Demands It: The Case for the Impeachment of Donald Trump. With an introduction from The Nation’s John Nichols, it lays out, with precision and context, exactly how we we can see Forty-Five impeached. Which, not to put to fine a point on things… we need.

Fein has been working hard to get the word out. Another point he emphasizes, as he put it in a recent editorial at the Huffington Post:

The Constitution states that the president may be impeached for “Treason, Bribery, or other high Crimes and Misdemeanors.” But those “high Crimes and Misdemeanors” don’t need to be criminal offenses. The framers borrowed the phrase from England, where officials were impeached for abuses of their office that were not always criminal offenses, and that’s how the framers used the phrase.…

The fact that Trump has committed impeachable offenses that are not crimes has been lost in our current public discussion, which misleadingly speaks of impeachment as either a prerequisite to or a consequence for a finding of criminal violations. This narrow framing effectively shrinks the scope of Congress’ impeachment power by ignoring serious but non-criminal offenses like pocketing foreign emoluments and abusing the pardon power.

To make a statement about the urgency of stopping Trump now, and get Congress’s attention, we’re working to gather enough pre-sales for the book to debut on the New York Times Best Sellers list. So far, so good — get in on the action right here.

The book’s not out until August 14th, but it’s already got some prominent supporters. Actor and activist (actrovist?) Alyssa Milano spread the word to her (*cough*) 3.3 million followers: 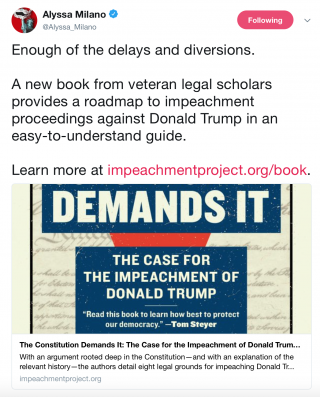 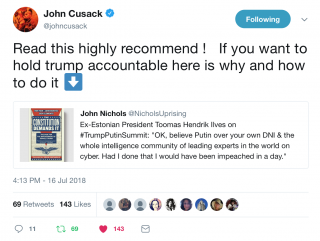 Philanthropist and activist Tom Steyer has made his support for the book and its message clear: “We are in the midst of a constitutional crisis. This book lays out the case for impeachment against Donald Trump in stark terms. If you are troubled about Trump’s lawlessness, I think it is your responsibility as a concerned citizen to read this book and to learn how best to protect our democracy.”

Basically, it’s time to get moving. Pre-order your copy today. Get word to a friend. Talk about it. Tweet about it. If you want an image to post, post the image at the bottom of this text.

Impeach Trump. It’s the only cure for the constitutional crisis we’re in. No one’s going to act until we do. Let’s move.