Harvey Weinstein, a liar, denies having used former Mossad agents to get an advance look at Rose McGowan’s memoir 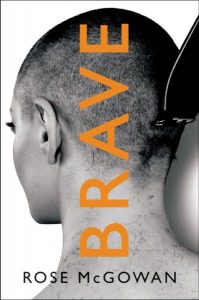 So we all now know what a disgusting creep Hollywood producer Harvey Weinstein is, thanks partly, as we wrote last month, to the outspokenness of actress Rose McGowan, who responded to reporting on Weinstein’s misconduct by calling publicly and insistently for the board of the Weinstein Corporation to resign en masse in protest. McGowan is among the women named in Jodi Kantor and Megan Twohey’s extremely pot-stirring recent New York Times report as victims paid to keep silent.

McGowan, who is best known for her roles in the TV series Charmed and movies like Scream and Grindhouse, has been working on a memoir entitled Brave, due out from HarperCollins this January. McGowan writes on the publisher’s website, “My life, as you will read, has taken me from one cult to another. Brave is the story of how I fought my way out of these cults and reclaimed my life. I want to help you do the same.”

The publisher goes on to reveal pieces of McGowan’s life story:

Born and raised in the Italian chapter of the Children of God, she escaped through a cornfield at night, moved to the states, and ran away at thirteen. She lived a transient punk lifestyle on and off the streets until she was “discovered” on a curb in Los Angeles and became one of Hollywood’s most desired actresses overnight…

The Hollywood machine packaged her as a sexualized bombshell, hi-jacking her image and identity and marketing them for their profit.

They expected Rose to be silent and cooperative and to stay the path. Instead, she rebelled and asserted her true identity and voice. She re-emerged unscripted, courageous, victorious, angry, smart, fierce, unapologetic, controversial, and real as f*ck.

But news about the memoir has been marred by controversy… and here’s where the grim Weinstein truth gets even grimmer. According to new reporting by Ronan Farrow in the New Yorker, Hollywood’s inflated slug began a project of “damage control” more than a year ago, in the hope of preventing his crimes from coming to light. Farrow writes:

In the fall of 2016, Harvey Weinstein set out to suppress allegations that he had sexually harassed or assaulted numerous women. He began to hire private security agencies to collect information on the women and the journalists trying to expose the allegations. According to dozens of pages of documents, and seven people directly involved in the effort, the firms that Weinstein hired included Kroll, which is one of the world’s largest corporate-intelligence companies, and Black Cube, an enterprise run largely by former officers of Mossad and other Israeli intelligence agencies. Black Cube, which has branches in Tel Aviv, London, and Paris, offers its clients the skills of operatives “highly experienced and trained in Israel’s elite military and governmental intelligence units,” according to its literature.

Farrow goes on to tell the story of a woman of how McGowan was introduced by her literary agent to “a woman who identified herself as Diana Filip, the deputy head of sustainable and responsible investments at Reuben Capital Partners, a London-based wealth-management firm.” The two women became friends. Farrow again:

Filip told McGowan that she was launching an initiative to combat discrimination against women in the workplace, and asked McGowan, a vocal women’s-rights advocate, to speak at a gala kickoff event later that year…. Filip also repeatedly told McGowan that she wanted to make a significant investment in McGowan’s production company….

In fact, “Diana Filip” was an alias for a former officer in the Israeli Defense Forces who originally hailed from Eastern Europe and was working for Black Cube, according to three individuals with knowledge of the situation. When I sent McGowan photos of the Black Cube agent, she recognized her instantly. “Oh my God,” she wrote back. “Reuben Capital. Diana Filip. No fucking way.”

Mind. Blown. So what did Black Cube want from McGowan? According a contract signed with them this summer and quoted by Farrow, they were looking to “‘provide intelligence which will help the Client’s efforts to completely stop the publication of a new negative article in a leading NY newspaper’ and to ‘obtain additional content of a book which currently being written and includes harmful negative information on and about the Client,’ who is identified as Weinstein in multiple documents.” While they clearly didn’t succeed—the article in question must surely be the New York Times reporting that put Weinstein in headlines last month, and the book is to be published in two months—they did walk away with dozens of hours of recorded conversation with McGowan and more than a hundred pages of transcipts.

A spokesperson for Weinstein told Farrow “the assertion that Mr. Weinstein secured any portion of a book [is] false and among the many inaccuracies and wild conspiracy theories promoted in this article.”

We can celebrate that these efforts to silence Weinstein’s critics have failed. Brave’s cover was released to the public this week. Looks like Harvey and his cronies hadn’t counted on McGowan’s tenacity and determination. All the money and power in the world can’t close the floodgates now. May they drown in their own depravity.