The fairy tale came true: on Saturday, May 19th, Prince Harry, the gingerist of all British royals, married yank actress Meghan Markle. Which, of course, means the UK and the US are now officially joined in holy matrimony. Upside: no one has to change their name as we’re already both “United.” Downside: we don’t have to share Donald Trump, do we?

13.1 million British viewers tuned their telly boxes to see the royal couple leave St. George’s Chapel as husband and wife, and over 100,000 people lined the streets of Windsor to join in the festivities. A full-on British knees-up (that means “lively party”… now we’re married you have to learn our slang) ensued across the country, including street parties, an extension on pub closing times and a plethera of drinking games. (Did you spot one of Prince Harry’s exes? Drink.)

According to Philip Jones at the Bookseller, the first publisher to cash in on the wedding is Pitkin, an imprint of Pavilion Books, which will be releasing Harry & Meghan: The Royal Wedding Book on June 7th. It will be a “royal souvenir edition, in commemoration of the day, [that] showcases photographs from historical royal weddings, the duo’s childhood and careers, and includes image of the couple’s engagement as well as their wedding ”

Speedy work there from Susan Swalwell, Pitkin’s publisher. But while this may be the first book focusing specifically on the wedding, many books have been published on the royal couple in the past few years. A few favorites: Will colouring books never sod off (“go away”)? There are so many of these bastards out there that it was hard to pick a favourite, but I’m plumping for The Royal Wedding Colouring Book: Colour In Harry and Meghan’s Hollywood Romance published by Orion’s Trapeze imprint. It’ a book whose ingenious use of defiled film quotes will have you reaching for the crayon box. From the publisher’s website:

Bring Prince Harry and his sweetheart Meghan Markle to life in classic scenes from Titanic (“I’m sixth in line to be king of the world!”), Jaws (“You’re going to need a bigger moat”), THAT scene from When Harry Met Sally, The Shining (“Heeeere’s Harry!”) and A Streetcar Named Desire (“I’ve always depended on the kindness of gingers”), among many others.

Idea for a sequel: The Wedding’s Aftermath. Colour-in scenes including a plastered David Beckham at three in the morning vomming (“ejecting matter from the stomach through the mouth”) over a disgruntled Victoria (“Posh Spice”), while Harry decides to don his Nazi costume as Elton John rocks out a verse of Saturday Night’s Alright on the ivories.

But the crown cannot survive on colouring books alone. But since we all know weddings can be bloody boring (yawn), so why not whip out a puzzle book so for a distraction from all the love and stuff? Maybe Harry & Meghan Word Search: Beautiful and Handy Souvenir Puzzle Book for Royal Wedding 2018 Fans. This is part of a trend of dress-up paper doll books, which have been published in droves over the past few years, for some reason. Here’s what this one offers:

Dress the happy couple up for every occasion, including: Relaxing at home in their unicorn onesies, A seventies disco, A super fancy red carpet event, And of course, a Royal Wedding!

They’ve smashed all occasions, there.

Idea for a book: to make the royals more relatable, how about dressing up Meghan after her first trip to Primark? 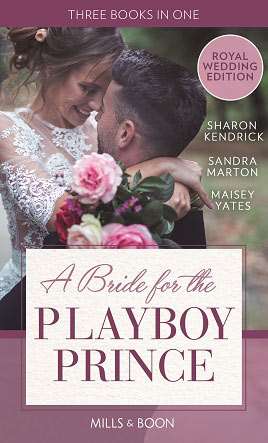 A Bride for the Playboy Prince is not officially about Harry and Meghan, but in a lovely use of scenario, Mills and Boon describe it as “the perfect romance to celebrate Harry and Meghan’s wedding.” Here’s a brief extract to pique your, er, interest:

As his gaze roved over her, the sheer individuality of her appearance hit him on a purely visceral level. He had dated some of the world’s most desirable women — beautiful women whose endlessly long legs gave him the height he preferred in sexual partners. But Lisa was not tall. She was small, with deliciously full breasts which drew a man’s eyes to them no matter what she was wearing, or however much she tried to disguise them. She was none of the things he usually liked and yet there was something about her which he’d found irresistible, and he still couldn’t work out what that something was. Our last title is self-published, mostly because it’s hard to imagine this conversation happening at a publishing house:

“Shall we publish a book about the royal wedding?”

“What do we want it to contain?”

And so it was left to the private citizenry to produce Harry and Meghan: A Love Story Journal: Commemorative Blank Journal. Available on Amazon, of course.