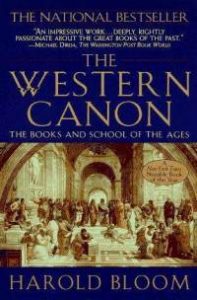 Harold Bloom—literary critic and longtime Yale professor—died on Monday at the age of 89.

Bloom was perhaps the bestselling literary critic of all time. He is most known for his rigorous defense of the Western Canon, arguing that it didn’t and shouldn’t matter if the West’s definition of literary Genius happened to be overwhelmingly white and male. Aesthetic Beauty is Aesthetic Beauty, and Genius is Genius.

This philosophy earned him many detractors, especially as academia came to embrace critical lenses like feminism, marxism, and post-colonial theory in the 1970s and 80s.

As Dinitia Smith writes in the New York Times obituary for Bloom:

Professor Bloom was frequently called the most notorious literary critic in America. From a vaunted perch at Yale, he flew in the face of almost every trend in the literary criticism of his day. Chiefly he argued for the literary superiority of the Western giants like Shakespeare, Chaucer and Kafka — all of them white and male, his own critics pointed out — over writers favored by what he called “the School of Resentment,” by which he meant multiculturalists, feminists, Marxists, neoconservatives and others whom he saw as betraying literature’s essential purpose.

Indeed, Bloom lamented the fact that something like identity politics could automatically and undeservedly elevate a writer into the canon, famously quipping that he was not a fan of “Eskimo Lesbian fiction.” It may not be enough to call such a sentiment “unfashionable.”

Perhaps the Bloomian legacy that we can most comfortably celebrate is one of athletic feats of literary consumption and memorization. Smith’s obituary continues:

Professor Bloom called himself “a monster” of reading; he said he could read, and absorb, a 400-page book in an hour. His friend Richard Bernstein, a professor of philosophy at the New School, told a reporter that watching Professor Bloom read was “scary.”

Armed with a photographic memory, Professor Bloom could recite acres of poetry by heart — by his account, the whole of Shakespeare, Milton’s “Paradise Lost,” all of William Blake, the Hebraic Bible and Edmund Spenser’s monumental “The Fairie Queen.” He relished epigraphs, gnomic remarks and unusual words: kenosis (emptying), tessera (completing), askesis (diminishing) and clinamen (swerving).

Never one to fade away, Bloom published over 40 books throughout his career, including two this year and one still forthcoming. He even taught his Thursday class at Yale last week.