Reaching for ketchup on one of Parks’s covers.

It is a little-known, untrue fact that Leo Tolstoy used to write in the village square — the faces inspired him.

It is an equally little-known, but truer, fact that crime novelist Brad Parks does his daily writing at a Hardee’s in Staunton, the town in Virginia’s Shenandoah Valley where he lives with his wife and kids.

As Laura Peters writes this week in the News Leader, Parks often spends hours a day at the fast-food joint, “clicking the keyboard, observing the customers and chatting with the employees.” He even buys empty drink cups a bundle at a time, so he can walk in, sit down, and load up at the soda fountain without waiting in line. And at least once, the sight of Parks walking around Hardee’s mumbling to himself has brought police in to question him.

Hardee’s shift leader Melanie Beasley says that when Parks first became a regular, she googled his name to double-check that he’s really a novelist. Now that his story’s checked out, she describes him as “still weird, but a good weird.”

Before moving to Staunton, Parks used to write his award-winning crime fiction at a Hardee’s in the town of Middlesex, a couple hours’ drive away. 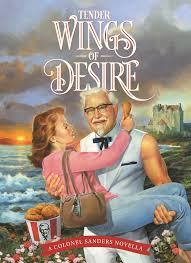 For insight, we reached out to Catherine Kovach, who qualifies as an elder statesperson of the fast-food-lit scene largely by virtue of having authored Tender Wings of Desire, the KFC-inspired romance novel we wrote about on its release last year. Nearly a year on from the publication of this magnum opus (“please don’t actually call it my magnum opus”), Kovach speculates on the fictional possibilities of the accelerated-ingestion environment:

I could easily imagine writing a romance thriller or mystery about a sexy Hamburglar trying to stay one step ahead of a dangerously obsessed (and sexy) police officer who has to answer to a grizzled Mayor McCheese. Wendy can easily be the main character in a cozy romance about two rival chefs. The mascot is the easiest way to tie-in the work with the actual fast food joint while still keeping the story legitimate.

Of course there is also my dream of a giant fast food romance crossover featuring a love triangle between Wendy, Ronald McDonald, and the Burger King. I mean does she choose the humble clown? Would she rather be a princess? Keep reading to find out!

In fact, though, neither Kovach nor Parks is slinging prose about humanoid burger politicians these days. Kovach says she’s “trying to go legit by writing non-fast-food-related things”; for National Novel Writing Month last year, she composed a novel in public on the platform tablo.io, a murder mystery called Jenny Was a Friend of Mine that she hopes to publish soon.

As for Parks, his newest book, Closer Than You Know, publishes next week, and has already got starred reviews from Kirkus and Library Journal. Not only that — on Wednesday, he declared with much elation that Hardee’s has finally started following him on Twitter. Congrats all around.

Is Philip Roth's retirement for real?