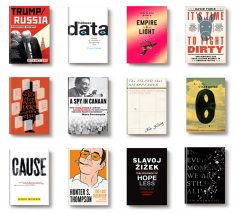 All of these books are available for a total savings of 40%, through Monday. A deal to remember!

And whatever is getting you through, we’d like to add one thing to the list: for the holiday, and through Monday, we’re offering an additional twenty percent off our already discounted prices on every new book we’ve published in 2018. All of ’em. If it wasn’t in print on 12/31/17, and it is now, and there’s a little blue house on the spine—BOOM!—you can get it for a total of forty percent off until Tuesday morning. Here’s the magnificent dozen. The discount has already been applied. Go crazy.

That’s not all we’ve been up to this week, of course — it’s been as busy a time as ever, and we’ve got the bloggage to show for it: We were also exceptionally happy to publish:

As ever, there were a couple stories we just didn’t get to this week:

And finally, it is Saturday, and you are surely expecting your cartoon. Here it is! As spring is, at long last, springing, perhaps a viewing of Amadee Van Beuren’s 1935 classic The Sunshine Makers is in order. Hail his majesty the sun!

And there you have it! Stay safe around the grill, keep your best swimmin’ holes secret, buy discounted books!, and we’ll see you back here on Tuesday morning.