And, not least of all, happy 179th birthday of Joaquim Maria Machado de Assis, widely regarded as one of Brazil’s greatest-ever writers, and the owner of what must be considered the greatest beard in Latin American history (sorry, Fidel).

Machado was the first president of the Brazilian Academy of Letters, and is the namesake of the academy’s prize, the Prêmio Machado de Assis, Brazil’s most prestigious literary award. In 1867, Machado was even knighted by Brazil’s emperor (yup), Dom Pedro II (who possessed the second-greatest beard in Latin American history).

We’re proud to publish Machado’s satirical novella The Alienist in our Art of the Novella series. It tells the story of Simão Bacamarte (the name means “blunderbuss”), a colonial-era physician whose obsession with curing every disease in the town of Itaguaí may itself be… a little unhealthy. Let’s just say the doctor has a hard time finding anyone who doesn’t belong in the new asylum he’s built.

The book was made into a well-received movie in 1970, and adapted as a graphic novel by twin brothers Fábio Moon and Gabriel Bá in 2007. It’s a delight — sophisticated, hilarious, and profoundly well observed. To help procure your agreement, here’s the book’s opening chapter:

I. How Itaguai Acquired a Madhouse

The chronicles of Itaguai relate that in remote times a certain physician of noble birth, Simão Bacamarte, lived there and that he was one of the greatest doctors in all Brazil, Portugal, and the Spains. He had studied for many years in both Padua and Coimbra. When, at the age of thirty-four, he announced his decision to return to Brazil and his home town of Itaguai, the King of Portugal tried to dissuade him; he offered Bacamarte his choice between the Presidency of Coimbra University and the office of Chief Expediter of Government Affairs. The doctor politely declined.

“Science,” he told His Majesty, “is my only office; Itaguai, my universe.”

He took up residence there and dedicated himself to the theory and practice of medicine. He alternated therapy with study and research; he demonstrated theorems with poultices.

In his fortieth year Bacamarte married the widow of a circuit judge. Her name was Don Evarista da Costa e Mascarenhas, and she was neither beautiful nor charming. One of his uncles, an outspoken man, asked him why he had not selected a more attractive woman. The doctor replied that Dona Evarista enjoyed perfect digestion, excellent eyesight, and normal blood pressure; she had had no serious illnesses and her urinalysis was negative. It was likely she would give him healthy, robust children. If, in addition to her physiological accomplishments, Dona Evarista possessed a face composed of features neither individually pretty nor mutually compatible, he thanked God for it, for he would not be tempted to sacrifice his scientific pursuits to the contemplation of his wife’s attractions.

But Dona Evarista failed to satisfy her husband’s expectations. She produced no robust children and, for that matter, no puny ones either. The scientific temperament is by nature patient; Bacamarte waited three, four, five years. At the end of this period he began an exhaustive study of sterility. He reread the works of all the authorities (including the Arabian), sent inquiries to the Italian and German universities, and finally recommended a special diet. But Dona Evarista, nourished almost exclusively on succulent Itaguai pork, paid no heed; and to this lack of wifely submissiveness—understandable but regrettable—we owe the total extinction of the Bacamartian dynasty.

The pursuit of science is sometimes itself therapeutic. Dr. Bacamarte cured himself of his disappointment by plunging even deeper into his work. It was at this time that one of the byways of medicine attracted his attention: psychopathology. The entire colony and, for that matter, the kingdom itself could not boast one authority on the subject. It was a field, indeed, in which little responsible work had been done anywhere in the world. Simão Bacamarte saw an opportunity for Lusitanian and, more specifically, Brazilian science to cover itself with “imperishable laurels” — an expression he himself used, but only in a moment of ecstasy and within the confines of his home; to the outside world he was always modest and restrained, as befits a man of learning.

“The health of the soul!” he exclaimed. “The loftiest possible goal for a doctor.”

“For a great doctor like yourself, yes.” This emendation came from Crispim Soares, the town druggist and one of Bacamarte’s most intimate friends.

The chroniclers chide the Itaguai Town Council for its neglect of the mentally ill. Violent madmen were locked up at home; peaceable lunatics were simply left at large; and none, violent or peaceable, received care of any sort. Simão Bacamarte proposed to change all this. He decided to build an asylum and he asked the Council for authority to receive and treat all the mentally ill of Itaguai and the surrounding area. He would be paid by the patient’s family or, if the family was very poor, by the Council. The proposal aroused excitement and curiosity throughout the town. There was considerable opposition, for it is always difficult to uproot the established way of doing things, however absurd or evil it may be. The idea of having madmen live together in the same house seemed itself to be a symptom of madness, as many intimated even to the doctor’s wife.

“Look, Dona Evarista,” said Father Lopes, the local vicar, “see if you can’t get your husband to take a little holiday. In Rio de Janeiro, maybe. All this intensive study, a man can take just so much of it and then his mind…”

Dona Evarista was terrified. She went to her husband and said that she had a consuming desire to take a trip with him to Rio de Janeiro. There, she said, she would eat whatever he thought necessary for the attainment of a certain objective. But the astute doctor immediately perceived what was on his wife’s mind and replied that she need have no fear. He then went to the town hall, where the Council was debating his proposal, which he supported with such eloquence that it was approved without amendment on the first ballot. The Council also adopted a tax designed to pay for the lodging, sustenance, and treatment of the indigent mad. This involved a bit of a problem, for everything in Itaguai was already being taxed. After considerable study the Council authorized the use of two plumes on the horses drawing a funeral coach. Anyone wishing to take advantage of this privilege would pay a tax of a stated amount for each hour from the time of death to the termination of the rites at the grave. The town clerk was asked to determine the probable revenue from the new tax, but he got lost in arithmetical calculations, and one of the Councilmen, who was opposed to the doctor’s undertaking, suggested that the clerk be relieved of a useless task.

“The calculations are unnecessary,” he said, “because Dr. Bacamarte’s project will never be executed. Who ever heard of putting a lot of crazy people together in one house?”

But the worthy Councilman was wrong. Bacamarte built his madhouse on New Street, the finest thoroughfare in Itaguai. The building had a courtyard in the center and two hundred cubicles, each with one window. The doctor, an ardent student of Arabian lore, found a passage in the Koran in which Mohammed declared that the insane were holy, for Allah had deprived them of their judgment in order to keep them from sinning. Bacamarte found the idea at once beautiful and profound, and he had the passage engraved on the façade of the house. But he feared that this might offend the Vicar and, through him, the Bishop. Accordingly, he attributed the quotation to Benedict VIII.

The asylum was called the Green House, for its windows were the first of that color ever seen in Itaguai. The formal opening was celebrated magnificently. People came from the entire region, some even from Rio de Janeiro, to witness the ceremonies, which lasted seven days. Some patients had already been admitted, and their relatives took advantage of this opportunity to observe the paternal care and Christian charity with which they were treated. Dona Evarista delighted by her husband’s glory, covered herself with silks, jewels, and flowers. She was a real queen during those memorable days. Everyone came to visit her two or three times. People not only paid court to her but praised her, for—and this fact does great honor to the society of the time—they thought of Dona Evarista in terms of the lofty spirit and prestige of her husband they envied her, to be sure, but with the noble and blessed envy of admiration. 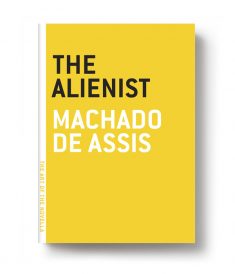 The Alienist is likely better than the last book you read. You can get a copy here, or from your neighborhood independent bookseller.