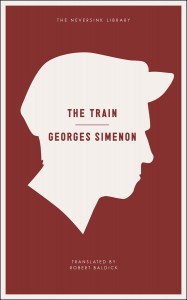 For much of the twentieth century, Simenon was the hardest-working man in the European fiction business, churning out nearly 500 novels over the course of his career, and dozens more short stories. He created the character of Commissaire Maigret, a hardnosed-but-charitable police inspector who has been played in screen adaptations by everyone from Charles Laughton to Rowan Atkinson. And he lived an interesting life — the kind of guy who temporarily moved his family to a boat called the Ostrogoth that spent months traversing the canals of France, and who once agreed to write an entire novel in twenty-four while sitting in a glass cage in public, taking plot points from spectators and passersby, improv-style. (He didn’t up end going through with it, but he seems to have enjoyed that, later in his life, a lot of people believed he had.)

We’re happy to publish two favorites from Simenon’s extensive catalog: The President, a thriller of political secrets and power in decline, and The Train, a story of mayhem unleashed on a man’s quiet life by the Nazi invasion of France, before which, critic Brigid Brophy wrote, Simenon had been “a master without a masterpiece.”

If you’re looking for a way to celebrate, this clip from Manu Riche’s documentary The Man Who Wasn’t Maigret is worth watching, for its interesting footage as well as its bizarrely intense music:

There are any number of Simenon adaptations to watch, too. A good place to start is Harold French’s 1952 movie version of The Man Who Watched Trains Go By (later released in the US as The Paris Express), starring Claude Rains and Marius Goring: