The universe lost a great one yesterday, with the passing of theoretical physicist Stephen Hawking. Among Hawking’s many accomplishments—after a diagnosis of amyotropic lateral sclerosis when he was just twenty-one, he went on to make generation-defining discoveries in the study of black holes, gravity, and quantum mechanics—he was also a prolific author.

His 1988 book A Brief History of Time was a New York Times bestseller and made the complexities of the cosmos accessible to more earthbound minds. “This book marries a child’s wonder to a genius’s intellect,” a Sunday Times (London) review read. “We journey into Hawking’s universe while marveling at his mind.” He also wrote a series of books for young readers (starting with George’s Secret Key to the Universe) co-authored with his daughter Lucy Hawking, a lavishly illustrated guide to the popular physics (The Universe in a Nutshell), a memoir (My Brief History) and many volumes in between.

Some notable tributes from the twitterverse, below. 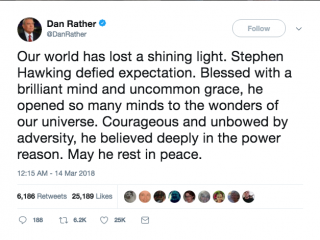 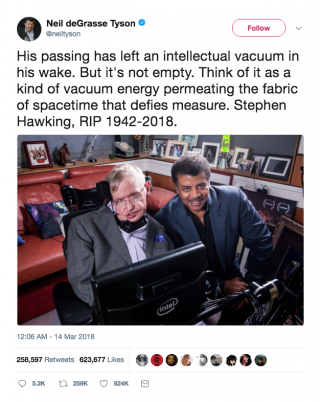 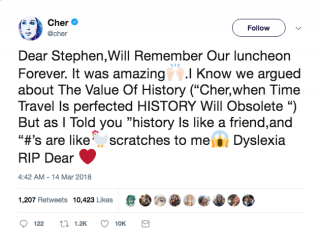