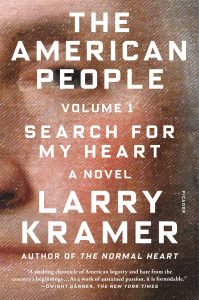 It was announced Wednesday that legendary AIDS activist and author Larry Kramer has died of pneumonia at the age of 84.

In the early 1980s, Kramer helped found the Gay Men’s Health Crisis, a pioneering advocacy organization for HIV- positive people. After disagreeing with the other founders about mission and tactics, he went on to form Act Up, a grassroots organization famous for its direct actions that has served as the inspiration for many social justice since.

After receiving an Oscar nomination for his screen adaptation of D.H. Lawrence’s Women in Love, Kramer’s first novel, 1978’s Faggots went on to be a bestseller, and his acclaimed 1985 play The Normal Heart dramatized his falling out with the Gay Men’s Health Crisis.

His more recent literary output consisted of two encyclopedic novels of alternate American history, The American People (Volumes I and II), which were praised for their boldness and ambition (interestingly, the New York Times obituary for Kramer devotes a fair amount of space to reflecting on their previous negative reviews of these novels).

Kramer was in the news as recently as late March for both his work in progress–a play detailing a life lived through the 3 plagues of HIV-AIDS, Covid-19, and a broken leg late in life–and his decades-long frenemy-ship with Dr. Anthony Fauci, who has been director of the National Institute of Allergy and Infectious Diseases since the peak of HIV infections in the mid-1980s.

Kramer had loudly criticized Fauci and the federal government for failing the victims of the HIV-AIDS, but by the end of his life the two had reached something of an understanding: with the doctor admiring the activist’s ability to effect change, and the activist lamenting the position the doctor is in vis-a-vis the Trump administration’s insistence on letting yet another plague run rampant.

He will be missed.