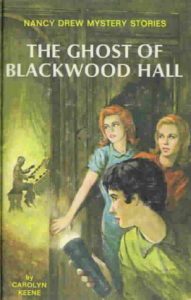 One notable exception was always Nancy Drew. The sensible and dauntless strawberry-blond detective who always made her handsome daddy chuckle because she always had the answer. Well not anymore. Because, kids, she’s dead. That’s right: dead. Add one more to the dead girl column.

Who killed Nancy Drew? Well, we don’t know for sure in the fictional universe, but the author who put pen to paper and committed this blasphemy is one Anthony Del Col, who has been the mind behind a Nancy Drew and Hardy Boys cross-over graphic novel series for Dynamite Entertainment since 2017.

He saw fit to kill Ms. Drew in the forthcoming installment, aptly titled, Nancy Drew & the Hardy Boys: The Death of Nancy Drew! (the gall of that exclamation point…) in the interest of adding a “noirish spin” to the sunny, high school sleuths. You see, he was “inspired by the conventions of film noir.” So if this isn’t clear enough yet—smart deep stuff, because it’s dark.

Del Col, who was interviewed in the New York Times, was “very surprised” when there was some blowback to his decision.

But blowback there is. The Times quotes the author of Girl Sleuth: Nancy Drew and the Women Who Created Her, Melanie Rehak, who notes that a dead Nancy Drew “goes against something really fundamental about her — which is that she’s able to get herself out of situations because she’s resourceful and clever,” and that even if this is all just a marketing ploy and Nancy will emerge alive and well at the end, it is still a “peculiar choice” to even put the thought of a dead Nancy Drew in our collective cultural minds.

The Times notes that Nancy Drew has been cited as inspiration to many a female leader. They note: “Hillary Clinton, Nancy Pelosi, Ruth Bader Ginsburg and Sandra Day O’Connor are among the women who have cited Nancy as an early influence.”

But let’s complicate the How Dare You Kill Female Hero, Nancy Drew with a colorful quote from a 1973 paper in the Journal of Popular Culture, titled “Nancy Drew, WASP Supergirl of the 1930s”:

At sixteen she ‘had studied psychology in school, and was familiar with the power of suggestion and association.’ Nancy was a fine painter, spoke French, and had frequently run motor boats. She was a skilled driver who at sixteen ‘flashed into the garage with a skill born of long practice.’ The prodigy was a sure shot, an excellent swimmer, skillful oarsman, expert seamstress, gourmet cook, and a fine bridge player. Nancy brilliantly played tennis and golf, and rode like a cowboy. Nancy danced like Ginger Rogers and could administer first aid like the Mayo brothers

Right, right, Nancy Drew was always a little annoying, wasn’t she? Which is not to say, we’re pro killing Nancy Drew here at MobyLives.

But ah, to occupy a space between perfect and dead! Would that Nancy Drew knew the eternal complexities of that horrific limbo…