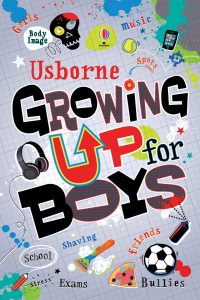 Ah, puberty: that magical time when we turn from cute little angels to hormone ridden hell-beasts. Or, as the Urban Dictionary puts it, “Gods way of testing young people between 12-18 to see if theyre worthy of adulthood, very few are chosen.”

To help explain to young readers the ticking time bombs that are their bodies, the UK’s Usborne Publishing offers Growing Up for Boys by Alex Frith, which aims to help boys through the awkward years, covering topics that include body image, self-confidence, sex and relationships, drugs, cyberbullying, and exam stress.

Ignoring here the question of why we need separate books for boys and girls in the first place (I mean, come on), as Alison Flood reported last week in the Guardian, the book has stirred up controversy and outrage over sexist content that perpetuates dangerous gender stereotypes.

Wtf? From the @Usborne book 'Growing up for Boys': Girls have breasts for two reasons – feeding babies and looking grown-up and attractive. pic.twitter.com/r1I34eLlvK

Girls have breasts for two reasons. One is to make milk for babies. The other is to make the girl look grown-up and attractive. Virtually all breasts, no matter what size or shape they end up when a girl finishes puberty, can do both things.

The backlash on social media has been substantial, and a spate of one-star review on Amazon shortly followed:

Apparently, Usborne announced it would discontinue publishing gendered titles three years ago, following a campaign led by parent group Let Books Be Books. Growing up for Boys was published in 2013 and has reportedly sold 26,000 copies to date. LBBB campainger Trisha Lowther told Flood, “It’s disturbing to see this kind of sexism in a book aimed at pubescent boys. It suggests that girls’ bodies are for boys to look at, which is not the kind of message we’d expect publishers of children’s books to want to send out.”

Following Ragoonanan’s, many chimed in to defend the book, too. A person tweeting under the name Cristi Neagu, for instance, countered, “Most men find breasts attractive. Most women show off and are proud of their breasts. Why is that, then?”

In fact, attitudes toward breasts vary culturally and historically, as Kate Lister argues in a recent piece on the controversy at iNews:

In a 1951, anthropologist Clellan Ford and ethologist Frank Beach made a study of 191 cultures and reported that breasts were considered sexually significant to men in only 13 of those cultures. In Breastfeeding: Biocultural Perspectives, cultural anthropologist Katherine Dettwyler recounted telling friends in Mali about sexual foreplay involving breasts and that ‘they regarded it as unnatural, perverted behaviour, and found it difficult to believe that men would become sexually aroused by women’s breasts, or that women would find such activities pleasurable’. More than this, attitudes around breasts have shifted significantly over time, the only constant being that breasts feed babies.

That’s not even getting to the blatant fact that we should not be teaching boys, at any age, to objectify women.

Fen Coles, the co-director of Letterbox Library, a children’s bookseller and education supplier specializing in books “in which all children can see themselves and which reflect our world community in all of its diversity,” told Flood:

“The language used, bearing in mind this is a book ‘for boys’, strongly suggests that girls’ breasts exist for boys, for their admiration, for their gaze.

“If we want to encourage our children to have healthy relationships with each other and if we want to build a culture of consent, suggesting body parts exist solely for their ‘use’ by another person, seemingly outside of the control of the person the body part belongs to, is at the best, disempowering and at the worst, very dangerous. This is ill thought out, regressive and irresponsible language being used in what is intended as an educational book. We’re very surprised this wasn’t picked up by an editor.”

After initially withdrawing the book, Usborne has now decided to pulp their existing stock. They promise to revise the language for any future editions. An official statement from the press, reprinted in Flood’s article, reads:

“Again we are very sorry indeed for any offence this has caused.

This particular chapter aimed to explain and demystify to boys what girls go through at puberty, and to promote mutual respect and understanding.

Usborne stands against gender stereotyping, or any kind of objectification of women and girls… It is our aim to create books that are engaging, educational, child-friendly and accurate, and which communicate the values of respect and understanding. We welcome all feedback that helps us to achieve this.”

Alex Frith, the book’s author, said in an email to the New York Times’ Peter Libbey, “If any parent read the entire book and felt concerned that young boys would grow up thinking they had a biological right to objectify women, then I am horrified.”