Christmas is now less than a week away, and the BBC is kicking off its festive programming this Sunday with a new rendition of A Christmas Carol.

Dickens’ perennial favourite is the story that never, ever dies. Even those who haven’t read it or seen one of the many film adaptations will likely be familiar with Scrooge and his “bah humbug” approach to life and Christmas. First published in December 1843, Dickens wrote the novella in only six weeks. The first filmic version seems to be a short British film from 1901 and since then, year after year it has been adapted for theatre, film, and television, with Scrooge being played by a plethora of actors from Albert Finney to Bill Murray; from Patrick Stewart to, Michael Caine … with a bunch of Muppets in tow.

The new BBC adaptation features, amongst others, Guy Pearce as Ebenezer Scrooge and Andy Serkis as Ghost of Christmas Past, and its executive producers are no less than Ridley Scott, Tom Hardy, and Stephen Knight. It is being described as darker in tone than perhaps we are used to from previous adaptations, with the BBC calling it “a haunting, hallucinatory, spine-tingling immersion into Scrooge’s dark night of the soul.”

It isn’t just film and television that take license with Dickens’ story; there are colourful versions of the book that exist out there in the world. Let me introduce you to just a few which put a … twist … on the original. Brace yourselves. 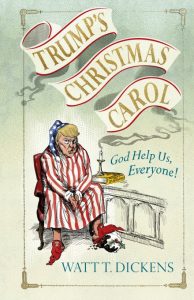 If old Ebenezer Scrooge can see the error of his ways, surely impeached President Trump can too?? Where are a bunch of ghosts when you need them? And once they’re done with Trump, can we pass them on to Boris Johnson?

“I have the best ghosts, everyone says so”

“President Ebenezer Trump is a rich old fool, whose heart is as small as his hands and whose words are as false as his hair. On Christmas Eve, he is visited by three spirits, all intent on changing his evil ways: Bill Clinton, the jovial Ghost of Christmas Past; Barack Obama, the big-eared Ghost of Christmas Present; and the terrifying Ghost of Christmas Yet to Come, who shows him how abolishing Obamacare will finish off Tiny Tim…” 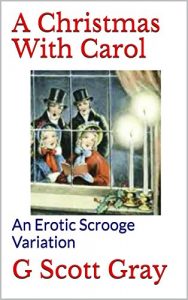 “What does the ghost of Christmas Present show him at Fred’s party? And why is Scrooge upset when one of the guests goes upstairs with Carol, an attractive woman whom he met recently? And why do Mr and Mrs Cratchit make so much noise (especially Bob) on the morning of Boxing Day when their children are sound asleep?” 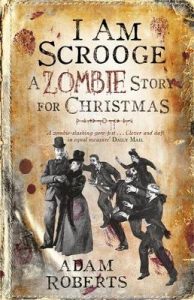 I Am Scrooge: A Zombie Story for Christmas by Adam Roberts

Nothing says Christmas like rising from the dead (oh hang on, that’s Easter…)

“Marley was dead. To begin with.

“Just how did the happiest day of the year slip into a welter of blood, innards and shambling, ravenous undead on the snowy streets of old London town?

“Will the ghosts of Christmas Past, Present and Future be able to stop the world from drowning under a top-hatted and crinolined zombie horde?” 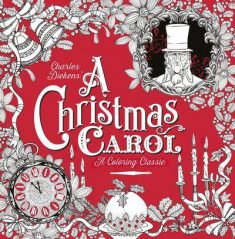 A Christmas Carol (A Coloring Classic)

Of course there’s a colouring book! When isn’t there? This offering is actually incredibly tasteful given the other pickings surrounding it. Just visualising a quiet afternoon colouring away with a mulled wine in hand is soothing me quite a lot right now.

“Intricate line work combines with iconic quotations and scenes to create a memorable book that will inspire creativity and take you and Scrooge on an unforgettable journey to Christmases past, present, and future.”

Poor Carl. He’s a mean bastard because the love of his life got away. Maybe, just maybe, he’ll find a man for Christmas. Just like the original.

What a choice of stocking fillers! The BBC One series will be on TV on Sunday 22 December, Monday 23 December and Tuesday 24 December.