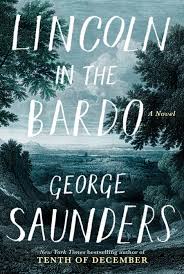 The much-anticipated first novel by George Saunders—beloved essayist, short story writer, and What We Do Now contributor—is nearly here.

Entitled Lincoln in the Bardo, it is a surreal extrapolation of the (actual, historical) 1862 death of Abraham Lincoln’s eleven-year-old son, Willie. As Saunders’s grief-stricken Lincoln visits his son’s crypt, he finds the  boy’s soul in the bardo, the space between life and death in the Tibetan tradition.

Saunders populates his approximately seven-hour narrative—a long night of graveyard mourning—with the restless voices of other ghosts inhabiting the liminal bardo space. Aiming to represent a cross-section of America at that time, the kaleidoscopic novel includes 166 voices in all.

This truly ambitious literary undertaking will be matched by an equally ambitious audiobook, featuring different performers for each of those 166 voices. It’s so ambitious, in fact, that Penguin Random House Audio, the audiobook publisher, will be applying for the Guinness Book of World Records nod for “most voices on a single audiobook.” But these aren’t your grandmother’s stuffy old voice actors. The groundbreaking audiobook will include the likes of Julianne Moore, Nick Offerman, Lena Dunham, and many other heavy-hitters.

As Saunders told Time in an email:

I had approached Kelly Gildea, the producer, with high hopes but also (I can see in retrospect) with no idea of how much I was asking—the sheer amount of work and organization. But she agreed immediately and went to work on it: 166 different voices, one for every character in the book, no doubling, and the final cast included A-list Hollywood talent, amazing audiobook professionals, and (especially meaningful to me) a bunch of family members, close friends, and volunteers from Random House and ICM. I love the way that the variety of contemporary American voices mimics and underscores the feeling I tried to evoke in the book: a sort of American chorale.

Audiobooks represent one of the fastest-growing areas of the publishing industry, and while I suspect that there won’t be much competition for this specific Guinness Record anytime soon, we’re sure to see more creative and star-studded releases moving forward.

Lincoln in the Bardo will be available on February 14, for the valentine in your life.