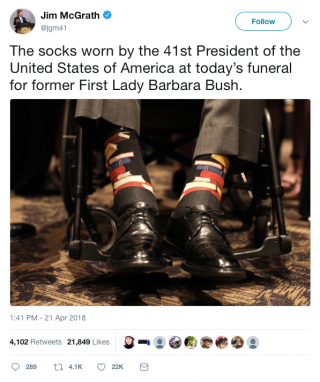 Former president George H.W. Bush has long been known for his epic sock game (need more proof), and at last week’s funeral services for his wife, Barbara Pierce Bush, he defended his title. As many news outlets have reported, Forty-One sported some impressive book socks to honor his wife’s memory and champion her commitment to literacy. The spokesman for the couple, Jim McGrath, tweeted out a photo of the now-famous socks, backing up a tweet from earlier in the day:

To honor his wife of 73 years and her commitment to family literacy, for which she raised over $110 million over the course of over 30 years, @GeorgeHWBush will be wearing a pair of socks festooned with books at today’s funeral service for former First Lady Barbara Bush

Barbara Bush was the founder of the Barbara Bush Foundation for Family Literacy, committed to increasing literacy among low-income families and bolstering the habit of reading. Per the organization’s mission statement, their goal is “to advocate for and establish literacy as a value in every home.”

The socks Bush wore were a present from John Cronin, the twenty-two-year-old co-owner of John’s Crazy Socks, as Rory Tingle reported for the Daily Mail. Cronin, from Long Island, has Down Syndrome, and runs the online store with his father, Mark. Their website states that they donate five percent of their earnings to the Special Olympics; the site also features a story about Bush and his book socks. 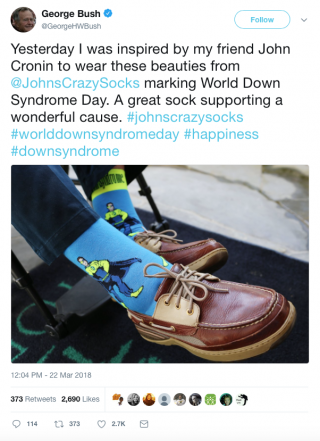 Rebecca Bratek at CBS News reached out to Cronin, who says he was contacted by Bush’s office last week (and, we should point out, this is not the office’s first purchase from John’s Crazy Socks). “It made me feel sad and I cried because he lost his wife,” Cronin said. “But it made me feel good, too, because I wanted the socks to make President Bush feel better. I wanted the socks to make him happy.”

Bratek reports that the Cronins have sold more than 600 pairs of the now-famous socks so far, with all profits going to the Barbara Bush Literacy Foundation.

Bush, who signed the Americans with Disabilities Act into law in 1990, had previously tweeted a photo of himself sporting a different pair of John’s Crazy Socks: Specifically, John’s “Down Syndrome Superhero Socks,” in celebration of World Down Syndrome Day on March 21.

Of course, H.W. is also accused of some pretty gross lechery, which is just to remind you that there’s no sweet or kind news anymore of any sort and the world is a dumpster fire.