Founded in 2005, The International Booker Prize is a welcome date on the calendar each year, not only because it celebrates international literature and their translations into English but because it is one of the few big prizes that shines a spotlight on independent publishers. 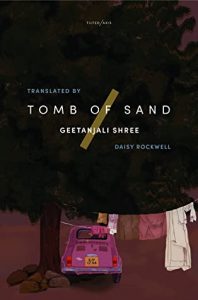 The winner was Tomb of Sand, written by Geetanjali Shree and translated by Daisy Rockwell, and published by Tilted Axis. Set in northern India, the story follows an eighty-year-old woman who slips into a deep depression at the death of her husband, then resurfaces to gain a new lease on life. Insisting on travelling to Pakistan, she simultaneously confronts the unresolved trauma of her teenage experiences of Partition, and re-evaluates what it means to be a mother, a daughter, a woman, a feminist.

It is the first book originally written in any Indian language, and the first novel translated from Hindi, to have won. The Prize money of £50,000 prize is split between author and translator equally.

On winning the prize Shree said, as reported by the BBC:

“I never dreamt of the Booker, I never thought I could …What a huge recognition. I’m amazed, delighted, honoured and humbled…

“Behind me and this book lies a rich and flourishing literary tradition in Hindi, and in other South Asian languages. World literature will be the richer for knowing some of the finest writers in these languages.”

This year a record number submissions were received for the prize with 135 books being considered by the judges, who consisted of translator and author Jeremy Tiang, author and academic Merve Emre, writer, and presenter Viv Groskop, writer and lawyer Petina Gappah, and the chair of judges, translator and writer Frank Wynne. Wynne said the judges were “captivated by the power, the poignancy and the playfulness” of Shree’s novel, continuing to say, as reported by The Bookseller:

“This is a luminous novel of India and partition, but one whose spellbinding brio and fierce compassion weaves youth and age, male and female, family and nation into a kaleidoscopic whole.”

Shree, who has been writing for more than 30 years, is the author of three novels and several story collections. Tomb of Sand is the first of her books to be published in the UK. When interviewed by John Self for the Guardian on why she thought this particular novel resonated with the judges she said:

“I think it speaks to the pluralism of the world, the polyphony of the world, and that somehow captures the imagination of people. I also think there’s a lot of inventiveness in the language, which seems to have appealed.”

Rockwell also expressed her delight at the win and her happiness in shining a light on Indian literature, saying, as reported by The Bookseller:

“Of course there’s at least 14 Indian languages with active literary traditions that go back some 200 to 300 years, even thousands of years. But there’s virtually nothing that’s published outside of India, there’s very little interest…

“It’s not just a personal thing, this is about bringing our community outside the borders of India and into the limelight. So many deserving authors and translators should be heard from and we’re delighted to forge a path for all of them”.

Tilted Axis press was founded in 2015 Deborah Smith, who has previously won the International Booker herself for her translation of  The Vegetarian by Han Kang’s. A non-profit press publishing mainly work by Asian writers, they had an impressive total of three books on the longlist before winning with Tomb of Sand.

Not only did this year’s prize highlight the wonderful work independent publishers are doing championing literature in translation, the shortlist was dominated by women, with five out of the six titles written by female authors.