Gee, I wonder why this big heady book about totalitarianism is selling so well! 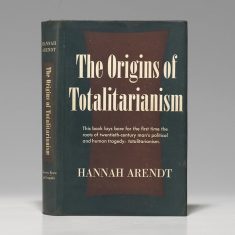 A first American edition of Arendt’s Origins of Totalitarianism

A couple weeks back we reported that sales of a permanent good-seller, The Handmaid’s Tale by Margaret Atwood, were on the rise.

And while Atwood voiced a pretty good idea as to why this is the case (the election of Donald Trump), skeptics (those somehow in denial about the rise of fascism in America, the UK, and many other parts of the world) could, if they felt like it, doubt her claim. They could say, “Hey, with a television series forthcoming on Hulu, and that Super Bowl commercial, too, it’s no surprise the book is selling, buffoon in the Oval Office or no.”

True enough. I mean, hey, we can be skeptical of by-the-Amazon-numbers weather balloons, too. And besides, The Handmaid’s Tale has always sold very well. Ditto 1984, which has also been selling like crazy since January.

As far as I know, though, there’s no back-to-school reading or made-for-TV programming explanation for this week’s surprise bestseller: The Origins of Totalitarianism, a 700-page examination of Nazism and Stalinism, by ferocious public intellectual (and last interviewee) Hannah Arendt.

As Brady Dale writes in a recent report for the Observer, “90 percent of the digital copies of Origins that Kobo has sold in the entire last year have closed since the inauguration, according to Nathan Maharaj, from the company’s marketing team.”

Further, as of this writing, the book is the number-one bestseller on Amazon in the “Fascism” category and number 864 overall, a ranking that few books ever reach.

Arendt’s first major work, Origins has long been influential in politics and academic circles — and recently, many have been quick to note its new relevance. On December 17th, 2016, in the Washington Post, Jeffrey C. Issac wrote:

How could such a book speak so powerfully to our present moment? The short answer is that we, too, live in dark times, even if they are different and perhaps less dark, and “Origins” raises a set of fundamental questions about how tyranny can arise and the dangerous forms of inhumanity to which it can lead.

Earlier than that—shortly before the election—our own Ingrid Burrington, author of Networks of New York, published a piece about Arendt’s book entitled “How a dead WWII-era philosopher understands Donald Trump better than anyone on CNN.” In it, she concludes:

Origins as a book and Arendt’s political theory broadly are imperfect tools for analyzing today’s United States (Arendt’s later writings on American racism, for example, showed an inability to comprehend antiblackness and the civil rights movement). But the number of parallels between the origins of today’s election climate and The Origins of Totalitarianism should set off some alarms. Work remains to be done.

As Arendt points out, the refusal and failure to take the threat of totalitarianism seriously often enabled those movements to seize power. Totalitarian regimes are ideologically constructed to inevitably destroy themselves—and Trump’s own outrages may have blown his shot at the Oval Office (this time!)—but that doesn’t necessarily mean something better will rise up from the mountain of skulls to take their place.

With the unavoidable destruction still to come, it is time to get serious — and to get to work. Start with a book—this book, sure—but do not—do not—stop there.