For Black Friday, one New York indie is offering a free Chomsky e-book 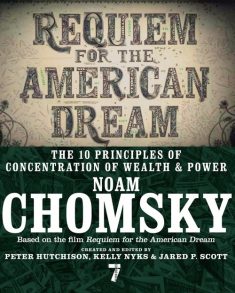 To the list of things that can help—genius innovations in bail-funding, people reading poems to jellyfish, bold and well-funded translation initiatives, failed highbrow TV pilots from days gone by—we can add one more entry: Noam Chomsky’s Requiem for the American Dream being given away as a free e-book by its publisher, the spicy and much-beloved New York– and Oakland-based indie Seven Stories Press. Today marks the end of the giveaway—today at 6pm New York Time, to be precise—so grab ’em while they’re hot.

Requiem is culled and transcribed from a few years’ worth of interviews Chomsky gave with filmmakers Peter Hutchinson, Kelly Nyks, and Jared P. Scott, and it finds America’s fluffiest dissident (who turns eighty-nine next week) holding forth on wealth and income inequality. It includes substantial citations from a wide range of sources that include Supreme Court decisions, The Wealth of Nations, various reporting from journalists and think tanks, and one Citigroup report on “plutonomy” from 2005 (“Our overall conclusion is that a backlash against plutonomy is probable at some point,” they write, like a bunch of damn geniuses). It also features dope, dollar-bill-themed art, and is generally cool.

We’ve written about free e-book deals from lefty presses in the past, and we hope to write about more of them in the future. Meanwhile, the clock is running out on this one, so grab it while you can.

Snappy dresser Slavoj Žižek: “Something is going on with Trump”