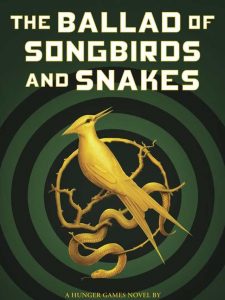 While the controversy over American Dirt is a-brewing right smack in the middle of mainstream book culture at the moment, the usually much-more-tumultuous YA publishing world has managed to kick up a dust devil of its own.

Suzanne Collins, famed author of the runaway best-selling, major-motion-picture-adapted Hunger Games trilogy, has done what all authors of runaway best-selling, major-motion-picture-adapted book series must eventually do, and has written a prequel. (I would like everyone who reads this blog post (yes, both of you) to each pay me $100 if they option this book and somehow split it into three movies. I see you, The Hobbit and Fantastic Beasts.)

The prequel, titled The Ballad of Songbirds and Snakes, explores the early life of the Hunger Games antagonist, Coriolanus Snow, and Collins recently released a special sneak peak of the book, due out in May. Fans were not happy.

Why? Well, The Guardian helpfully quotes a couple of choice reader comments to enlighten us. The gist is that they do not want “another story about some tortured white boy,” and the idea of creating an “origin story” about a “rich white boy becoming an authoritarian who loves *checks notes* genocide” was thought unseemly.

Scholastic is promoting the book as a meditation on the “important questions about authority, the use of violence, and the truth of human nature,” and Collins has stated that she wanted to explore “the state of nature, who we are, and what we perceive is required for our survival.”

So let’s put on our reading glasses and investigate, folks.

Here’s a passage from the preview:

The world still thought Coriolanus rich, but his only real currency was charm, which he spread liberally as he made his way through the crowd. Faces lit up as he gave friendly hellos to students and teachers alike, asking about family members, dropping compliments here and there.

“Your lecture on district retaliation haunts me.”

“How did your mother’s back surgery go? Well, tell her she’s my hero.”

Okay…so… we’re a little skeptical that the charms of Coriolanus Snow will so beguile young readers that they find themselves falling amorally in love with a future dictator, but we also do wonder if this book will really reveal important truths of human nature that Scholastic promises.

Basically, we’re back on the movie option question. That’s the money here, folks. Right now, somewhere in Glendale, a chiseled 18-year-old is practicing, “Love the bangs!” into the mirror, waiting to become the next Jennifer Lawrence, and if you didn’t enjoy the Joker discourse the first time, well, bad news…