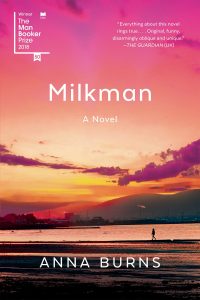 “The day Somebody McSomebody put a gun to my breast and called me a cat and threatened to shoot me was the same day the milkman died.”

Well, then. If this one line of prose doesn’t leave you the least bit curious, I don’t know what will. The first line of Milkman by Anna Burns is altogether an enigma—why did someone want to kill this character? Did he or she resemble a feline? Who in God’s name is the milkman and why did he die?

Milkman, first published in 2018 by Faber and Faber, then by Greywolf Press, has already garnered literary acclaim, having won the 2018 Man Booker Prize for Fiction—the first time a Northern Irish writer has won—as well as the 2018 National Book Critics Circle Award for Fiction. Burns wows her global fandom once more by being the first Irish woman to ever win the International Dublin Literary Award—a mere €100,000 . . . I don’t see the hype—the world’s largest prize for a single novel published in English. The announcement took place on Thursday, October 22 during the International Literature Festival Dublin which, unfortunately, could not be held in person, as with all events during this time.

The International Dublin Literary Award receives nominations from libraries all over the world, prompting Burns to recall her childhood as a wee lass: “To go from being a wee girl haggling over library cards with my siblings, my friends . . . to be standing here today receiving this award is phenomenal for me, and I thank you all again for this great honor.”

*Insert shameless plug about supporting libraries and indie bookstores during COVID-19* Burn’s words, not mine. But, seriously, just because the world is reopening doesn’t mean that your local libraries and indie bookstores aren’t struggling. Indeed, perhaps they’re struggling even more so now that the initial “hype” of supporting small, locally owned businesses during the pandemic has died down. The stores are open, that must mean they’re doing fine. I must politely disagree with you, madam; they need your help more than ever! As we wrote about this week already, take a stroll down to your local bookshop and support them any way you can, even if that’s telling your friends about it.

Now, I don’t know about you, but I’m going to go cozy up with this book and find out just what that milkman did to deserve his death. Happy reading!