Read all about it

There’s a lot you could say about yesterday’s giant New York Times exposé on Louis C.K. For instance, that it is a bummer very mondo indeed to see another proclaimedly woke man turn out, in fact, to be garbage. Or that it casts many scenes from his much-loved sitcom—like the one in which he goes on a talk show to heroically defend the art of self-gratitude against a dainty-yet-puritanical and much younger woman—in a ghastly new light.

What you can’t say about the Times reporting is that it was shocking. As some have pointed out, the impressive reporting in question—by Melena Ryzik, Cara Buckley, and Jodi Kantor—overlapped noticeably with a series of pieces Gawker published in 2012 and 2015. (This is in no way to diminish the value of the Times reporters’ work, which was more developed than the Gawker pieces.)

That earlier work, of course, might not have gotten done today—not in the same way, at least—for the simple reason that Gawker died last year, after vampiric tech bajillionaire Peter Thiel decided to sue them for more money than they had any chance of paying.

That lawsuit was far from an isolated incident — more like a sign of the times, in which access to money and access to speech seem to be increasingly the same thing. As we wrote in September, a year after Gawker, courts were busy with what may have been the largest cash settlement in US history, after a lawsuit filed by the eminently gross Beef Products, Inc:

Beef Products sued Disney over a 2012 report by Jim Avila that aired on ABC News (which Disney owns), in which USDA scientist Gerald Zirnstein describes a process by which meat waste is sorted in a centrifuge, sprayed with ammonia, and repackaged as “lean finely textured beef.” Zirnstein refers to the stuff as “pink slime”—because, to paraphrase Pee Wee Herman, it’s a pink slime—and says he won’t eat it. The segment is less than three minutes long.

Disney’s pay-out in that case was substantially larger than the damages that sunk Gawker — all the more striking for the fact that Disney settled rather than see the trial through. The option was available only because Disney is one of the world’s largest media conglomerates, with assets of around $93 billion. The New York Times Company, for the sake of comparison, is worth closer to $2.5 billion. The disparity, in an age when money and speech are increasingly conflated, is hardly academic. Fresh from paying off the nefarious beef cabal, Disney made ugly news last week when it started some beef of its own: the company banned LA Times reporters from attending advance screenings of any of its movies (which include major productions like the new Star Wars and the extant-for-some-fucking-reason Thor: Ragnarok). And they weren’t shy about why they’d done it: they were pissed off that Times reporter Daniel Miller had committed acts of journalism, in a story that examined relations between Disneyland, the company’s magical, stupid flagship theme park, and Anaheim, the major city (California’s tenth-largest) in which that theme park sits.

Disney has since lifted the ban — but only after a major retaliatory boycott of Disney films organized by critics at the Washington Post, and joined by the New York Times, the AV Club, the Boston Globe, and many others. Flavorwire’s Jason Bailey framed the stand-off in explicitly monetary terms, writing that the outlet would withhold “the only thing we have of value to that studio: the free advertising provided by not only reviewing their films, but write-ups of their trailers, production announcements, casting rumors, and so on.”

That newsrooms across the country should need to join hands so dramatically to stand down a tantrum from a single petulant corporation is sobering. And given current trends, it’s not clear how long they’ll be able, even collectively, to exert such force.

All of which is not even to mention last week’s shuttering of the beloved Gothamist family of publications, by billionaire owner Joe Ricketts. (In a refreshing break from the beef-centric stories of the summer, Ricketts made some of his money in bison meat. Now that’s flavor.) Ricketts acquired Gothamist this spring through DNAInfo, a site he had founded in 2009. He immediately had a series of negative stories about his family purged from Gothamist’s archives, and decided to kill the publication quick on the heels of an effort by staff there to unionize. 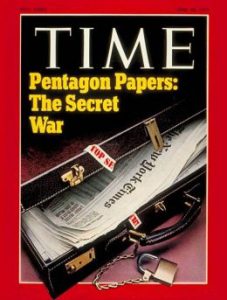 In his explanation for the closure, Ricketts crows, “I started DNAInfo in 2009 at a time when few people were investing in media companies” ignoring the hundreds of thousands of workers shaken out of the newspaper industry in recent years. They may not have had, like, bison money, but their work was a profound investment. It’s just that people like Joe Ricketts were busy devaluing it.

Later, he states things more plainly, writing that “businesses need to be economically successful if they are to endure,” and that his profits hadn’t been “sufficient to support the tremendous effort and expense needed to produce the kind of journalism on which the company was founded.” Which a smarter bisonaire might’ve figured out nine months ago, before he bought Gothamist?

Somehow, we live in a country that has decided to let the rules of money—which we haven’t figured out at all—control how we get our information, determine what we’ll know about the conduct of officials, corporations, and public figures. This is entirely, wildly bonkers. There are some things we might try, and we should do everything we can, but it seems obvious that we need massive change, on a structural level. That’s going to be incredibly hard, and we should probably get started.