Fire and Fury is a bestseller! Wait — not THAT one… 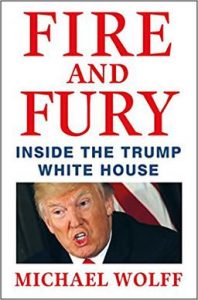 Here’s one way to create a bestseller — pick a title, and hope that ten years later an explosive Donald Trump exposé gets published under the same name.

The first Fire and Fury, subtitled The Allied Bombing of Germany, 1942-1945, is by Randall Hansen, a political science professor at the University of Toronto. Published by Doubleday in 2008, it examines the Allied bombing campaigns of World War II, which dropped nearly two million tons of bombs on Germany, destroying some sixty cities, killing more than half a million German citizens, and leaving 80,000 pilots dead.

The current Fire and Fury is Michael Wolff’s inside story of Donald Trump’s first year in the White House. Published last week in hardcover, it already has orders for over a million copies and is the the fastest-selling non-fiction book in the 151-year history of its publisher, Henry Holt.

Hansen was at a conference in Washington when Wolff’s book was released, stating he’d written a book with the same title. By the end of the day, his own book was ranking in three different bestseller lists on Amazon. He told Ashifa Kassam at the Guardian, “I haven’t seen this level of interest since the book first came out.”

Incredibly, sales of my https://t.co/8VeAA9DCFT have increased. Will I owe a larger royalty cheque to Bannon & Trump? If so, the irony will know no limits. #FireAndFury

Wolff took his title from a phrase Trump used in response to North Korean threats last summer. Hansen, meanwhile, told Samantha Schmidt at the Washington Post the book “is about what fire and fury actually looks like for some of the most innocent people.” Schmidt goes on:

Although Hansen isn’t a fan of the U.S. president, whom he described as “impulsive” and “childish,” he is grateful for the association with the book about Trump’s administration.

“If a few more people read my book now and reflect on the horrific consequences of war to civilian populations,” he said, “I think that would be a very good outcome.”

It certainly seems that some readers accidentally are accidentally buying the wrong book. Hansen told Kassam:

“It amused me and part of me thought, can people really be that dumb to be confusing these books?”

“I had a couple of bitter comments… There was one tweet, he came forward and said, ‘I bought this book by accident and there’s no way I’m reading it,’ in kind of this accusatory tone. I thought well, ‘it’s not quite my fault, mate.’”