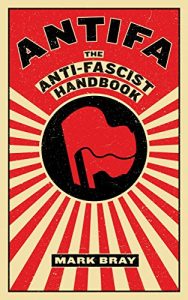 We’re not going to make nice with the Nazis. We’re not hearing them out. We’re not seeking constructive engagement with their political energies.

No. A bilious stew of hatred and violence spilled into the streets of Charlottesville this weekend. And this nation’s tuxedoed chimp of a president refused to call it what it was. It’s sickening, and demands a response.

Across the US and around the world, people of conscience are expressing solidarity. It’s time to take sides. On one side, fascists are committing murderous acts of terrorism. On the other, anti-fascists are chasing them out of pubic squares, and shining a light on the craven faces of hate. They’re part of a long tradition of struggle against fascism: antifa, for short.

This weekend, one such anti-fascist gave her life to that struggle. Heather Heyer, thirty-three, a paralegal and member of the Industrial Workers of the World, was mowed down in cold blood by a homegrown American domestic terrorist.

We know which side we’re on. And as we’ve written before, the feeling here, about how we fight forward through these strange and terrible times, is that we all do what we can with what we have. What we have is a publishing house. And so we’re running to get Mark Bray’s Antifa out as soon as we possibly can. It’s becoming clear that we’re going to need it.

Antifa is a complete anti-fascist handbook, a history of anti-fascist movements and also a field guide to the goals and tactics of anti-fascist work today. It answers questions, provides suggestions. It can be a tool for spreading information and organizing resistance. Mark was uniquely qualified to write it — he helped start Occupy Wall Street, and is seasoned as an activist and organizer, admired as a historian of human rights, terrorism, and radical politics.We’re racing now to get this out with all the urgency of the moment. We’ll keep you posted and let you know when it’s on shelves.

Because we’re not going to stand on two ends of a stage and debate the relative merits of fascism; fascism is a fire that wants to devour that stage.

We’re not going to clear our throats and aim at persuading them to consider our perspective; the rotten foundation of their politics is that our voices must be silenced.

We will fight fascism with anti-fascism, as people of conscience have done for as long as fascism’s been around. Watch this space for details, and take care. An injury to one is an injury to all.