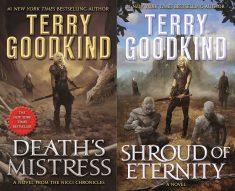 The first and second books in the Nicci Chronicles series… difference much?

New York Times bestselling author Terry Goodkind has sold over twenty-five million books worldwide. He is best known for his Sword of Truth series, and has a horde of fans, including a following of over 222,000 on Facebook.

So when he went public with his disapproval of the cover artwork for his new book, Shroud of Eternity, a lot of people were listening. And many didn’t like what they were hearing. On February 23rd, Goodkind posted on his Facebook page:

Some people were happy to play. Others were not, including the designer who illustrated the cover, Bastien Lecouffe-Deharme. Besides Goodkind, Lecouffe-Deharme has worked on covers for the likes of Philip K Dick, Frank Herbert, and Chuck Palahniuk. Commenting on Goodkind’s post, he replied:

It was nice working with you Terry. What you are doing is totally disrespectful. As if I didn’t create those covers accorded to exactly what I was told to do.

In my entire career I have never seen an author behaving like that.

To which Goodkind responded, “Bastien, we never worked together. I’ve never met nor have I ever even spoken with you. We’ve never exchanged a message before today. And I never told you what to create for this cover. All of that was between you and the publisher. I think there’s been enough pot-stirring for one day.”

Lecouffe-Deharme further expressed his upset in an interview with Heloise Wood at The Bookseller:

“I woke up one morning to find an email from a fan of Terry Goodkind letting me know that the author was conducting a poll to shame my artwork on his book cover. Because it was Terry Goodkind, I am aware of how famous he is, the question was, ‘should I just be quiet about it and would it hurt me even more if I speak up?’

While some agreed the artwork didn’t entirely suit the storyline and characterisation within the book, few felt the design itself was poor. Illustrator Leesha Hannigan took to Twitter to say she was “actually appalled” by Goodkind’s post. “Artists DIRECTLY follow a brief they are given by YOUR publisher. Publicly dragging the work they do for you is a dick move, not to mention incredibly unprofessional.” One fan on Facebook had a different angle: “Clever bit of marketing, I would say. The ‘Shroud of Eternity’ was not on my current reading list but it was definitely added and bumped up so I can figure out why the jacket art is an issue.”

Goodkind has now changed tack slightly to, slamming his publisher, Tor Books. On February 25th, he posted again on Facebook:

Goodkind never explains exactly why he’s taken a specific disliking to this cover, which doesn’t look too different from his others. It certainly wouldn’t look out of place in the fantasy section of your local bookshop. While it may be that the cover is out of sync with the contents of the book (which I haven’t read), it’s certainly true that most publishers take cover art very seriously, investigating lots of time, money, and attention to find the cover best suited to a particular book. And that’s our call, not the author’s.

Publicly shaming those who spend time crafting your book and helping you to the bestseller chart seems kinda foolish. Contracts can be cancelled. Diva moves won’t endear you to readers or publishing professionals. Take up your grievances with your publisher like a grown-up, don’t throw a social media hissy fit. It is most unbecoming.

Two lost Charlotte Brontë manuscripts will be published this year