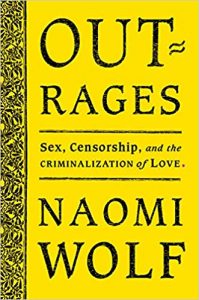 Back in May, Virago published Naomi Wolf’s new book Outrages: Sex, Censorship, and the Criminalization of Love in the UK.

Best known for her acclaimed feminist title The Beauty Myth, her new book argues that the British Obscene Publications Act of 1857 led to homosexual persecution in Britain getting worse, including the death penalty being carried out. She cited cases including that of Thomas Silver, a fourteen year-old boy who, she writes, was “executed for committing sodomy” in 1859.

But in a grim twist, the stuff of every publisher’s nightmares, it turns out the book contained some massive inaccuracies that were brought to light during an interview on BBC Radio 3’s Free Thinking programme. Presenter Matthew Sweet directly confronted Wolf, who claims in the book that during the nineteenth century, many men were executed for sodomy, which she inferred from Old Bailey records which listed the term “Death recorded” as a verdict for those on trial. However having done a bit of digging, Sweet broke the news live on air to Wolf that “Death recorded” does not mean execution, saying:

“It was a category that was created in 1823 that allowed judges to abstain from pronouncing a sentence of death on any capital convict whom they considered to be a fit subject for pardon … I don’t think any of the executions you’ve identified here actually happened.”

Not only that, but at the time “sodomy” referred to child abuse as well as homosexuality, which was the only definition Wolf was discussing in her book. Wolf appeared a little flustered on air after the revelations, saying it was “a really important thing to investigate.” Sure is. Perhaps the sort of investigation that should have been done before publishing a book…

Everyone listen to Naomi Wolf realize on live radio that the historical thesis of the book she's there to promote is based on her misunderstanding a legal term pic.twitter.com/a3tB77g3c1

Virago put out a statement after the painful interview, as reported by the Telegraph, saying:

“Virago stand by their author Naomi Wolf and the thesis of her book Outrages which is based on her Oxford PhD. With Naomi Wolf and her American publisher Houghton Mifflin we will make any necessary corrections.”

Having already published, Virago had little choice but to stand by the book. However, the case was not so simple for US publishers Houghton Mifflin Harcourt as they had not officially published yet, although books had been printed and gone out to many bookshops. A few days before publication in June, a spokeswoman for the publisher made a statement, which appeared in the New York Times, saying:

“As we have been working with Naomi Wolf to make corrections to ‘Outrages,’ new questions have arisen that require more time to explore. We are postponing publication and requesting that all copies be returned from retail accounts while we work to resolve those questions.”

Recalling books is not a decision a publisher takes lightly—it is a costly and time consuming operation. Wolf was not happy with the decision, saying in a statement:

“I stand by my work … The misinterpretations I made, I directly acknowledged and took immediate action to correct; but many of the other critiques are either subject to interpretation or are themselves in error. A rebuttal article was underway. More responsiveness and more transparency are the right answers to criticism, and not the complete withdrawal of a text.”

So she will certainly not be pleased by the latest news. This week it emerged that in fact Houghton Mifflin Harcourt has decided to cancel publication entirely, although apparently author and publisher have “mutually and amicably agreed to part company.”

As the messy affair comes to a close in the US for now, Wolf remained optimistic the book will still make it out to American readers, saying in an email, reported by the New York Times that “Outrages” would come out in the United States “in due course” and that she was preparing it for paperback publication in Britain.