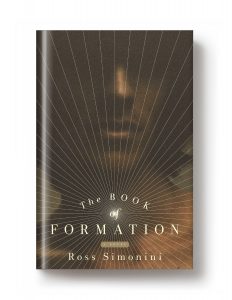 This week, as the Southern Hemisphere prepares for blizzard season and the Northern Hemisphere contemplates ways of making sweat stains fashionable, we’re taking a look at some of the books we have forthcoming in the next few months.

Ah, the “personality movement” of the nineties. Surely, if you’re old enough, you remember it — or you would remember, except that it’s a fiction born from the wildly fertile imagination of Ross Simonini. In his debut, The Book of Formation, Simonini creates a series of interviews with Masha Isle, the wild child adopted by Mayah, the movement’s celebrity advocate, in the process telling a timely story of our troubled celebrity culture, in which the famous are simultaneously exalted and abused, forced into constant reinvention, even as the rest of us are pressured toward their ranks.

We’re excited to publish The Book of Formation on November 14. In the meantime, here’s how it starts, to give you a taste.

For two decades I interviewed the man who helped us to stop being ourselves and become who we want to be. I was fortunate enough to know him well and in many forms: as a celebrity, hermit, target of media slander, miracle worker, mentor, director of a multi-million dollar media empire, and uncultured teenage fledgling, which is how I first met him on a winter morning in Los Angeles.

Most people never knew Masha Isle. They didn’t meet the boy who uttered every word with perfect ignorance. They met someone else: the fully formed adult, master of the personality arts — worldly, seasoned, glowing from televisions and presiding over his audiences like a natural born leader.

This book is my attempt to reintroduce the world to Isle. For those who know him through gossip and tabloids, here is a chance to meet him directly, without the pesky buzz of opinion. For devotees of his show, these talks reveal the icon as he was off-stage, out of his host position. For those who haven’t known Isle at all—the next generations—I hope this book serves as an authentic introduction.

Of course, to be properly introduced to the boy, you must first meet the mother. Anyone who lived through those pre-millennium years knew the name Mayah long before the arrival of her boy successor, and this, too, is how I met the Isles in the final days of 1994.

Ah, the ’90s — the moment I discovered I could work on myself. Actualize, as the saying then went. A decade of looking through the mirror. Self-transformation wasn’t a new concept, but to experience it then, when it was finally accepted into pop culture —that felt historic. Here was a new way to believe — no more years of studying the dreary history of religion. By then, all you needed was pure human potential.

When these talks began, Mayah! was in its eighth nationally syndicated season, the clear frontrunner among a wave of talk shows, which were collectively known as PM or “personality movement.” Likewise, Mayah’s growing mass of admirers referred to themselves as “personality movers” (or simply “movers”) and included a cast of celebrities whose endorsements lifted her to the most rarified peak of the American media landscape.

I admit, at this time in my life, I only knew the vague contours of PM. I had the same basic knowledge as any half-aware U.S citizen. I could recite a bit of the movement’s jargon but I didn’t really understand it. I’d seen a few episodes of the show, mostly to study Mayah’s dynamic interviews with her guests. I’d heard people making claims of radical transformations, shedding bad habits, eradicating unwanted opinions, but to me, it all sounded like overwrought psychoanalysis.

There were a slew of other hosts—Dr. Mark Todd, Tello Jeffers, Vicki Shore, Donel—and they all carved out their individual niches and interpretations of “p,” which, as best as I could understand, was some kind of energy substance at the root of our identities. But mostly, like everyone else, my attention was fixed on Mayah, who seemed to draw her energy out of an endless well of charm from which we all wanted to drink.

She was pervasive — on every red carpet, her arm around every shaker in show business. Within a few years, I watched as the entire media transition from run-of-the-mill celebrity fascination with Mayah into a certainty that this woman would progress our culture toward enlightenment. At some point, the majority had crossed a threshold, from the skeptics to the believers. Every food she ate, ensemble she wore, suggestion she made—the press received all of it as breaking news and later, as wisdom.

Unlike most celebrities, Mayah asked for a kind of attention that felt productive. We could all see that she was developing a new role for society, one that was feminine, intuitive, and healing to the dystopic patriarchy.

But as much as we loved her, it was painfully obvious that the system of thought behind her words wasn’t going to catch on. Her vigilance was endearing, and her sermons on the show were uplifting, but ultimately, all the talk about “p” seemed just too opaque for popular consciousness. The expanse of PM wasn’t suited for 600 word articles, so journalists usually glossed over it in a clause or two. You’d hear people throw the terms back and forth—let’s make a turn!—to show off their knowledge of pop trivia, but rarely did anyone dive beneath the movement’s reputation as the newest way to make yourself over. PM was everywhere, yes, but no one was really paying attention, which is how one of the great ideas of the late 20th century developed, hidden in plain sight.