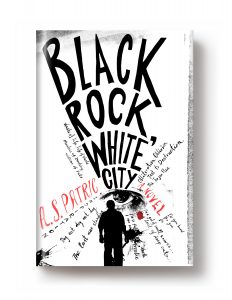 This week, as we do our best to enjoy the fleeting dizziness that follows the inflation of each and every beach ball, we’re taking a look at some of the books we have forthcoming in the next few months.

In his Miles Franklin Literary Award-winning debut novel, bookseller A.S. Patrić portrays an immigrant couple dealing with multiple challenges: the racist graffiti that keep appearing in their new city, the struggle to cope with displacement, and of course the war they’ve left behind in their native Sarajevo, never far from their minds.

A serious book that’s by turns eerie, funny, and wrenching, Black Rock White City hits bookstores on September 5. Here’s an early passage from the book — Jovan works as a hospital janitor, where, among other graffiti, he has recently found a fake eye chart involving the word “cogito” spraypainted on a wall:

The optometrist doesn’t make a fuss about the replacement charts. She asks Jovan to get rid of them. Specifically, she asks for the pile of them to be incinerated. He nods, says ‘no problem.’

The optometrist is a woman getting old quietly as much as gracefully. She doesn’t colour the silver streaks through her black, shoulder-length hair. There is a drift to the way she moves around her self-contained office. A delicate and precise focus about how she puts her hands to the equipment within it. Her patients come and go without disturbing anything. Without the usual troubles that they carry with them into the rest of the hospital.

It isn’t the kind of work a dentist does, which is all gums and pain, clamps and drills, blood and spit. The only thing that ever needs to touch a person is the bridge piece of the Optical Refractor, the immense apparatus she swings around her calmly seated patients. She asks a gentle question with the slightest click of her gears and dials. ‘Worse or better?’ are words she uses hundreds of times every week, and she enjoys their simplicity. The basic, clear improvement of someone’s vision. ‘Sharper or fuzzier?’

The Cogito eye charts have no place in her world.

They are almost identical to the actual eye charts and striking from a technical point of view. The numbers along the sides the optometrist uses to gauge visual acuity, the card that it is printed on, rather than thin paper. Even the made in USA at the bottom. It doesn’t matter because she knows they are wrong instantly. Every single random letter on each eye chart she can recite by heart. Has been doing so for thirty years already.

Her name is Miss Richards. She is known as such by everyone from Jovan to the Chief of Medicine. Miss Richards smiles at most of the hospital staff when she passes them in the halls, and mostly they smile back. She doesn’t think about who it might have been, of these people passing her daily — one of them going to such an effort to create fake eye charts. Miss Richards knows it isn’t a message for her. She thinks it’s more or less random.

There’s a large bin outside her office and it’s emptied every day. Jovan wonders why Miss Richards didn’t dispose of the charts herself, as he takes them away. Instead, she uses the word ‘incinerate’ twice as though it’s not enough that they be thrown away. They had to be incinerated.

Jovan puts up one of the modified eye charts on the inside of his locker door and stares at it as he changes into his overalls. He understands the Latin, it takes him a while longer to work out the anagrams in plain English. For one thing he’d never heard of an ogre (the OED tells him it is a man-eating giant) and didn’t know what gore meant initially, though he’d seen enough to know the difference between it and a bloody wound.

Another janitor, called Bill, tells him he’s the only man he’s ever seen study for an eye test and then laughs as if that’s about the best joke he’s heard all year. He repeats it every time he comes into the change rooms and guffaws. Elaborates by asking Jovan if he also studies for breath tests when he’s driving home. And he must be studied up by now for a blood test. Or has he prepared sufficiently to go into the staff cafeteria today and see if the new lunch menu passes the taste test? Does he think that if he goes to the MCG to watch Australia play South Africa in the cricket that he’ll pass that test? Jovan isn’t sure what he’s talking about. It’s getting more and more absurd. Jovan doesn’t take the eye chart down from his locker door.

The rest of the eye charts are at the bottom of his locker, beneath his runners and civvies. Almost all the eye charts are the same. There is one that wasn’t the Cogito. It repeated itself a number of different ways, reading in disorientating upside-down letters with this message:

Jovan closes his locker. There’s a space in his life these messages fill. It isn’t that he thinks they’re profound. He finds them interesting. It’s a shame they have been made by a mad man, because that worries Jovan — having these insane messages floating around in his head.

The right thing to do is what the optometrist has done. Ignore these messages as though they are the million and one words leaping out at everyone, from every angle, countless times every day. The advertising, graffiti, brand names of clothes, newspaper headlines, all the bare-knuckled words that keep hitting with as much force as can be mustered by the cunning of their multitudinous authors.