Fall book preview: The Philosophy of Beards by Thomas Gowing 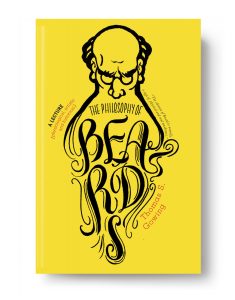 As summer gets going in earnest, we’re taking a look at some of the books we have forthcoming in the next few months. Honestly, we’re getting pretty excited. Right now, let’s have a look at our forthcoming reissue of Thomas S. Gowing’s The Philosophy of Beards, which hits shelves October 23rd.

The Philosophy of Beards, with illustrations by John Kettelwell, is an eccentric Victorian book that argues a strong case for the universal wearing of a beard — that essential symbol of manly distinction since ancient times.

It’s a humorous artifact from a bygone, but highly developed, culture of manliness — the perfect gift book for the manly man in your life.

Modernity gets to rediscover The Philosophy of Beards on shelves on October 23rd. For now, here’s a brief excerpt you can wet your whiskers in:

Not only was the Beard intended to serve the important purposes just described; but, combining beauty with utility, to impart manly grace and free finish to the male face. To its picturesqueness, Poets and Painters, the most competent judges, have borne universal testimony. It is indeed impossible to view a series of bearded portraits, however indifferently executed, without feeling that they possess dignity, gravity, freedom, vigour, and completeness; while in looking on a row of razored faces, however illustrious the originals, or skillful the artists, a sense of artificial conventional bareness is experienced.

Addison gives vent to the same notion, when he makes Sir Roger de Coverley point to a venerable bust in Westminster Abbey, and ask “whether our forefathers did not look much wiser in their Beards, than we without them?” and say, “for my part, when I am in my gallery in the country, and see my ancestors, who many of them died before they were of my age, I cannot forbear regarding them as so many old Patriarchs, and at the same time looking upon myself as an idle smock-faced young fellow. I love to see your Abrahams, your Isaacs, and your Jacobs, as we have them in the old pieces of tapestry, with Beards below their girdles that cover half the hangings.” The knight added, “if I would recommend Beards in one of my papers, and endeavour to restore human faces to their ancient dignity, upon a month’s warning he would undertake to lead up the fashion himself in a pair of whiskers.” In reference to this last allusion it may be as well to state, that the word whisker is frequently used by earlier authors to denote the moustache, and that in Addison’s time, a mass of false hair was worn, and the head and face close shaven. To shew that it is the Beard alone that causes the sensation we have alluded to, look at two drawings on exactly the same original outline, of a Greek head of Jupiter, the one with, the other without the Beard! What say you? Is not the experiment a sort of “occular demonstration” in favor of nature, and a justification of art and artists? See how the forehead of the bearded one rises like a well-supported dome—what depth the eyes acquire—how firm the features become—how the muscular angularity is modified—into what free flowing lines the lower part of the oval is resolved, and what gravity the increased length given to the face imparts.

As amusing and instructive pendants, take two drawings of the head of a lion, one with and the other without the mane. You will see how much of the majesty of the king of the woods, as well as that of the lord of the earth, dwells in this free flowing appendage. By comparing these drawings with those of Jupiter, you will detect, I think, in the head of the lion whence the Greek sculptor drew his ideal of this noble type of godlike humanity.