Fall book preview: Death and Other Holidays by Marci Vogel 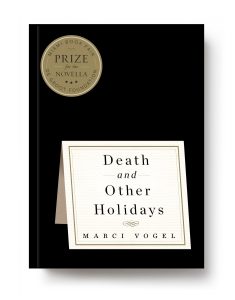 As summer gets going in earnest, we’re taking a look at some of the books we have forthcoming in the next few months. Honestly, we’re getting pretty excited. Right now, let’s have a look at Marci Vogel’s Death and Other Holidays, which hits shelves November 13th.

Funny, tender, and wholly original, Death & Other Holidays is a year in the life of a young woman coming to terms with the death of her beloved stepfather, while attempting to find love in LA. We are introduced to her friends and family, as she struggles to launch herself out into the world, to take the risks of love — the one constancy in all the change.

Told with a great good humor and underlying affection for all its characters, Death and Other Holidays, winner of the Miami Book Fair / de Groot Prize, announces a brilliant and assured new voice in American fiction. It’ll be in stores on November 13th. Meanwhile, to get you excited, here’s an early taste of the book.

I found this old camera when we were clearing out Wilson’s dresser drawers, and I’m going to start taking pictures. Libby says I’m going to drive her crazy with all the snap, snap, snapping every two seconds, but I read about this woman in the newspaper. She said she’s afraid of losing her mind, her memory, of being erased, so every day she takes a photograph of something, and that way she won’t lose her life when the time comes. I thought it was a good idea.

They say winter is the season of death, but anyone I’ve ever known who’s died, they died in the spring. They say you’re supposed to get this miraculous sense of renewal and promise, but it never happens that way, either. Libby says it’s because we live in Los Angeles, and our seasonal clocks are set by new lipstick colors, but I don’t think that’s it. Maybe the changes aren’t as obvious as in colder climates, but spring is spring, and it always feels kind of precarious. I mean, there’s so much upheaval, all those blossoms forcing their way out of winter branches, tiny sprouts trying to break through the dirt. The whole business just seems a colossal effort, and if you don’t have a pretty good reason for it, well, I guess I can understand why the entire scheme might not be worth another round.

Consider, for example, my father. He couldn’t stand it, not one more spring. He hanged himself the year I turned sixteen. He left me his Datsun B210 hatchback, and it was months before I learned to operate the clutch without stalling. And my mother’s mother, she held on all winter after a stroke. Halfway through March, she’d had enough. She made sure my mother knew how to cook a decent holiday brisket, then died in her sleep.

And now Wilson, my mother’s second husband, Wilson, he died last week. I thought maybe he’d live forever, and maybe he would’ve if we had insisted on staying past visiting hours. He was so polite, he’d never die with us there. My mother called early Sunday, though, told me to meet her by the nurses’ station. She took down all the get-well cards, tossed the dried-up flowers, his green striped pajamas, the slippers I got him last Father’s Day. It was all done.

“Hey there, beauty, baby girl,” he’d said. “Wilson’s life is over now, yours is just beginning.” He was pumped full of morphine and he wrote me this note: START, GO.

It was spring, and I knew he was right. I just didn’t feel up to it was all.

Death and Other HolidaysMarci Vogel