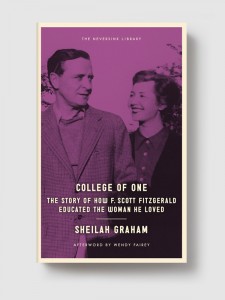 Fresh Air recently profiled the years that F. Scott Fitzgerald and Zelda Fitzgerald spent in the mountain town of Asheville, North Carolina. Fitzgerald turned 40 while staying in Asheville at the Grove Park Inn, where he hoped that being surrounded by wealthy and fabulous people would help him deal with the aftermath of tuberculosis and a declining reputation. But during those two summers in Asheville, he slipped into depression and was drinking heavily. He broke his shoulder, fell in the bathroom, and fired off a gun (which probably wasn’t a suicide attempt, although there was speculation that it was). While he hoped he could turn around his public image while in Asheville, he allowed a New York Post reporter to visit who portrayed him in an article as a “lost soul of the Jazz Age.”

Meanwhile, Zelda spent time in and out of a psychiatric facility at Asheville’s Highland Hospital, where she was probably suffering from schizophrenia. On March 10, 1948, she died tragically in a fire there.

As Maureen Corrigan notes at the end of the piece, “F. Scott Fitzgerald is said to have dictated a list of essential books during his time in Asheville—  Sanctuary by Faulkner is on it, and also Ibsen’s A Doll’s House.”

That list of books, which he went on to futher revise after he left Asheville for Hollywood in 1937, can be found in the recent Melville House publication of College of One along with other lists of music, drama, novels, classical texts and art books that he considered essential reading. College of One is Sheilah Graham’s memoir of the time she spent under the instruction of Fitzgerald during the final two years of his life as a he put together a syllabus of a personal education for the influential Hollywood gossip columnist. He died of a heart attack in her living room.