Excerpt from a brand-new paperback: The Girl in the Red Coat — Beth 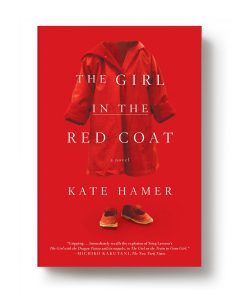 When we first published Kate Hamer’s The Girl in the Red Coat last year, the response was immediate: the book became a massive hit, receiving praise from critics and endless love from booksellers and readers. In the New York Times, Michiko Kakutani wrote that “Kate Hamer’s gripping debut novel immediately recalls the explosion of similarly titled books and movies, from Stieg Larsson’s The Girl With the Dragon Tattoo and its sequels, to The Girl on the Train to Gone Girl… What kicks The Girl in the Red Coat out of the loop of familiarity is Ms. Hamer’s keen understanding of her two central characters: Carmel and her devastated mother, Beth, who narrate alternating chapters… Both emerge as individuals depicted with sympathy but also with unsparing emotional precision.”

The Girl in the Red Coat tells the heart-racing story of a kidnapping, alternating between the voice of Carmel, the young girl who goes missing, and Beth, her increasingly panicked mother. It’s also a psychologically rich investigation of a mother-daughter relationship, and a story of competing motivations — of the many decisions we make, and beliefs we hold, against our better judgments. And, as of today, it’s out in paperback!

To give you something to read as you wait in line for your copy, here’s an early passage from the book, narrated in the voice of Beth, Carmel’s mother. Her assumption that Carmel has simply wandered off in escalating (rightly, we learn) to full-blown panic.

It will be like the day in the maze, I told myself. I’ll run round this field looking, scared witless, but we’ll find each other eventually.

The fog had grown cold and dense and I kept stumbling on empty plastic bottles and bumpy ground. ‘Carmel,’ I yelled at the top of my voice, ‘where are you?’

I kept yelling into the fog but it never answered. It just sucked up my voice into its blankness. I wanted more than anything to catch a glimpse of that red, like a poppy standing proud in a cornfield. But there was just a jumble of colour, made milky, as if looking through a wedding veil. I thought I’d go to the entrance and ask for help: an announcement on the tannoy. Or to the St John Ambulance in case she’d fallen over and was there right now having a plaster put on her knee while someone in uniform was saying, ‘All done. Now then, let’s find your mum.’

People were getting fed up and wanting to leave. The field was emptying, they were all at the entrance—a temporary arch made out of plywood with shapes cut into it to look like battlements—so I had to push past them. I knocked against the bodies without caring, muttering, ‘I’ve lost my little girl,’ over my shoulder to the ‘watch its.’ Several people asked if I was alright but I couldn’t stop to answer, I was too intent.

The ticket offices next to the arch were empty, the organisers probably guessing that no one would arrive so late in the day, so I had to find my way back again, all the time shouting, ‘Carmel, Carmel,’ till my voice was hoarse.

I found my way back into the tent where I’d last seen her. It’s too soon, I told myself, it’s too soon to panic. Stop it. Stop it now.

The trestle table where she’d stood was half empty—many of the books sold. I’d had the idea of asking the man with the till if he’d seen her but there was nobody there now. The thought came to me that the remaining books left out like this could so easily be stolen.

‘Carmel,’ I called. ‘Where are you?’ A man put his hand on my arm. ‘What’s the matter, love?’ ‘My little girl. I can’t find her.’ I realised my eyes were wet and stopped for a moment this time. ‘Oh dear. Dear. You need to get to the main tent. They’ll help you. She’s probably waiting there for you.’ ‘Yes—thank you. Thank you. Where is it?’ ‘Ask one of the staff—they’ll tell you.’  I rubbed at my eyes.

‘Don’t worry, love,’ he said. ‘You’ll find her. Mine were always getting lost when they were young.’

I took his advice and went outside to look for staff. He’s right, I thought. There must be an official tent or a place for lost children. But the fog was lacing the air so now it was hard to see the tents any more. Panic gripped my insides again. Even among so many other people I started to feel alone in some kind of new and terrible reality.

What if, what if . . . I never see her again? No. No, not that. I stumbled, then righted myself. Stop thinking it.  I tried to yell again but my voice had disappeared into a squeak and a sudden tide of terror washed over me. I reached out and wordlessly gripped a woman’s bright red sleeve. ‘Hey, get off,’ she said. ‘Get off me.’  She shook me off and got swallowed up into the fog.

Then one of the men on stilts walked right past me, his stilts close enough to touch. I could feel my voice re-gathering inside my throat in a shout—‘Please, help me. Help.’ I didn’t care any more what I said or if I sounded mad and frantic.

The stilts paused and started to move on so I shouted again and they stopped and the next minute a young man with cornrows all over his scalp had jumped down and was standing right next to me.

‘Did you ask for help?’ His clothes were made of patchwork and underneath the multi-coloured jacket his shoulders were strong, like he was active all day. I remembered the man with the cloth cap in the maze and I felt relief. The stilts man was part of the day, of the organisation. He could tell me where I needed to go.

‘My little girl, I’ve lost her,’ I said. ‘Where did you see her last?’  ‘In the place where they’re selling the books.’  ‘I bet a lot of people are getting lost in this. It’s bad luck it should happen today when we’ve been planning it for so long. A sea mist is always the worst. It must have been the hot weather this morning that brought it on.’

It made me feel a bit better when he said he expected lots of people were getting lost and separated, like this was just a mishap that would be sorted out.

‘I’ll take you to the admin tent and they can put a tannoy call out. You two’ll be glad to get home when you find her.’ Then he was guiding me across the field with his stilts tucked under his arm.

Inside the tent the fog had crept in and lay low on the ground so it got kicked up into little clouds as we walked. There was a woman with bright dyed red hair—the kind of red not even meant to look real—walking up and down and speaking into a walkie-talkie and I noticed a flap of brown paper had got stuck to the heel of her boot. Across the squashed grass of the floor people were packing things away in boxes.

The man in patchwork steered me up towards the red-haired walkie-talkie woman.

‘This lady has lost her daughter,’ he said. He went away and came back with a fold-up chair for me to sit on. But I didn’t want to sit down.

She looked up with sharp blue eyes and reluctantly re-sheathed the walkie-talkie in a leather holder on her belt that looked like it was meant for carrying guns.

‘I expect she’s just got lost in the crowds. How long is it since you’ve seen her?’ Silver flickered from her tongue as she spoke from the piercing there. She sounded like this losing of a daughter was nothing more than a pernickety nuisance and could be sorted out with a snap of her fingers—meaning she could get on with something more important.

I looked at my watch and with a burning spurt of real sickness in my throat I realised it must have been just over an hour.

‘Ages, an hour and a half. At least.’ I wanted to exaggerate because I sensed she wasn’t taking it seriously enough, that she didn’t have a daughter and thought that kids just ran off all the time.

She was shifting a foot around and suddenly became conscious of the paper stuck to her heel. With a movement like a ballerina she forked a leg behind her, holding her foot with one hand and peeling off the paper with the other.

When she was done she said, ‘I can put out an announcement.’

‘Please. Could you? Her name’s Carmel and she’s wearing a red duffel coat.’

‘How old is she?’ ‘She’s eight. Eight years old.’  So she walked off to where a tannoy system was set up on a trestle table and the man with cornrows looked at me with kind big eyes and said, ‘Don’t worry too much. It’s got a bit chaotic because of the weather.’ I nodded at him dumbly.

I heard an electric gasp as the machine was switched on and then the woman’s voice booming from the outside.

The Girl in the Red Coat is now available in paperback. Buy your copy here or at your neighborhood independent bookstore.