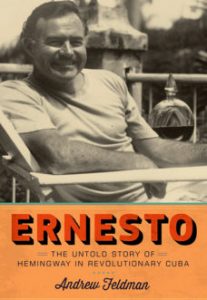 Grab Ernesto on May 28th, or get it here now

Ever the competitive and spiteful man, Ernest Hemingway once stole his wife Martha Gellhon’s job at Collier’s magazine, so that he could cover the frontlines of World War II himself—without her. The divorce was very soon to come.

His relationship with Collier’s, however, would be about as successful as his marriage to Gellhorn (his third). But from the ashes of these twin failures, rises an excellent little anecdote from the golden age of magazine publishing.

As Peter Moreira writes for the Columbia Journalism Review, Hemingway’s doomed stint with Collier’s came with an expense account of, perhaps, historic proportions:

[Hemingway’s] editors in New York were unimpressed with the six articles he filed. They were heroic portrayals, as requested, but of himself as much as of the protagonists in the epic events he was covering. Though he’d proven himself a capable war correspondent in Spain, China, and elsewhere, he had grown to dislike journalism. The relationship with Collier’s was cursed from the outset, and by the end of the war it had descended into a spat over an expense claim for about $13,000—or $187,000 in today’s money.

Indeed, Hemingway seemed more keen on being a combatant (and liberating the Ritz Hotel bar as you’ll learn in Andrew Feldman’s upcoming Cuban-tinged biography, Ernesto) than being a reporter. He seemed doubly keen on spending money. As Moreira continues:

His costs on the continent included the hire of two secretaries, a car and chauffeur on the black market, and “horse cabs for brief trips in Paris.” He charged the magazine for things that got lost or destroyed, including $350 ($5,000) for field glasses ruined in Schnee Eifel and a typewriter destroyed at St. Lo. His entertainment budget for this segment of the trip ran to $2,200 ($31,000). “All Paris entertaining necessarily Black Market because in War Correspondents Mess we [were] permitted only two guests per week,” he noted.

Not to be bullied by America’s most famous bully, Collier’s paid under 10 percent of the requested reimbursement—perhaps a sign of magazine publishing practices to come.