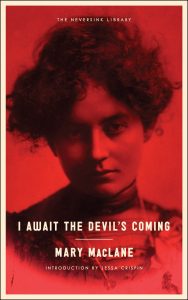 One of the most popular installments in our Neversink Library of re-discovered classics is Mary MacLane’s confessional memoir I Await the Devil’s Coming. It is the diary of a 19 year old MacLane, deeply frustrated by the severe social constraints of remote Butte, Montana, in 1902. The raw freedom of expression in the book caused a sensation, selling 100,000 copies in its first month alone, and scandalizing many.

Now, writer / director Jeff Verlanic is bringing the queer protofeminist classic to film. We asked him a few questions about the project, which you can learn more about and support here.

OK, we want people to help the cause, so give us your elevator pitch for the film.

This short explores how Mary MacLane became convinced that she was destined to marry the devil after her brief romance with the daughter of a traveling pastor ends in heartbreak.

Ok, the elevator ride was really short. What else would you like us to know about your project?

I was really interested in how to make a surrealist, queer, period piece that felt like equal parts David Lynch and James Ivory. The strength of Mary’s voice is that it somehow resonates with both of those frequencies—her crazed isolation in Montana at the end of the 19th century alongside this cosmopolitan bravado. I wanted to recreate this limbo Mary seems to be trapped within in her memoirs so I decided to shoot the film in an abandoned ghost town, Bannack, that was built in the same time period Mary would have been living in Butte. They have maintained the town without restoring it so the whole film has this destroyed quality to it. Nothing feels complete, we are literally trapped inside the ruins of her experiences of sexism and homophobia. How did you first encounter I Await the Devil’s Coming and how did you decide to make a film out of it?

Melville House legend (at least according to me) Dustin Kurtz sent me a free copy when I was hired on as a bookseller for 57th Street Books on the south side of Chicago. As a Montana literary fanatic I couldn’t believe I had never heard of her before. I related to her struggle on such a deep level, having been raised by ranchers in western Montana I felt the same intense love for the landscape but was similarly tortured by the isolation I felt within such a conservative culture. Our biographical similarities were secondary to the sheer intensity of her writing. She thought of herself as a coward, but her writing is some of the bravest, most honest, crazed, beautiful stuff I have ever encountered.

Is it hard to adapt such a personal, reflective text to a visual medium?

Derek Jarman always said he made better work when he had less money. He is the reason I make movies and I think he’s right, creative challenges should be seen as important opportunities to rethink, change, and adapt while staying true to your source inspiration. That said, it was a huge challenge to figure out how to dramatize Mary’s wild inner life. So, I decided to treat her like the Shakespearean female lead we never really got. Our lead actress, Rosa Gilmore, blew me away with her ability to make what were essentially soliloquies feel modern and alive. It wasn’t just her thoughtful writing that I wanted to do justice to either, in some ways giving voice to her gorgeous, outsized, ego was almost more of a challenge.

Why Mary MacLane? Why now?

Mary MacLane was a passionate, strong, intelligent woman living in a time and place where there wasn’t much room for that. Not much has changed but as I look around I see examples of women who spoke out against the status quo finally getting the audience they always deserved. I was so inspired by the Hilma af Klint exhibit at the Guggenheim and saw so many similarities between these remarkably foresighted women. Both Mary and Hilma explained their power away with theosophy, both gave the credit for their work to forces they gendered as male with Mary deferring to a male Lucifer and Napoleon Bonaparte and Hilma giving all of her ‘spirit guides’ male names. I am also just very excited to complicate our narrative of the American west. We only talk about cowboys and vigilantes while queer protofeminist visionaries are ignored. Mary should be one of our most vaunted authors. Her voice needs to be heard. No one felt that way more than she did.